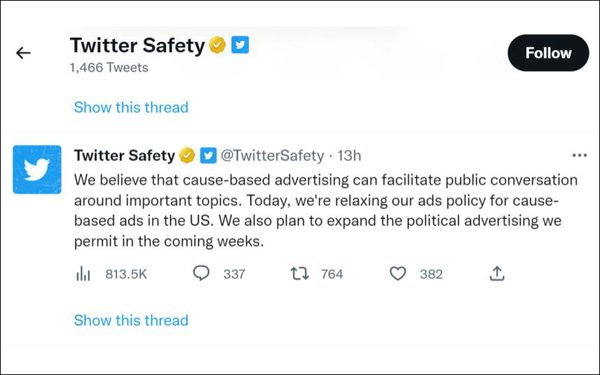 Twitter, struggling to raise revenue as many major advertisers continue to avoid the platform, says it will soon lift its three-year-old ban on political advertising.

The company also said it will relax its policies for caused-based ads—ads relating to issues or causes like abortion and climate change.

“We believe that cause-based advertising can facilitate public conversation around important topics,” the Twitter Safety account tweeted on Tuesday. “Today, we're relaxing our ads policy for cause-based ads in the US. We also plan to expand the political advertising we permit in the coming weeks.”

Their was little additional information, except for a tweet stating that, going forward, the company will “align our advertising policy with that of TV and other media outlets. As with all policy changes, we will first ensure that our approach to reviewing and approving content protects people on Twitter. We'll share more details as this work progresses.”

However, Twitter’s ads policy page was updated to state that caused-based ads that target only within the U.S. are now exempt from existing restrictions on those ads. Those restrictions allow these ads to geo-target at a state, province, or regional level, but not on a zipcode level. They also outlaw most other types of targeting, although targeting by keyword  and interest are allowed as long as the ads don’t include terms associated with political content, prohibited advertisers, or political leanings or affiliations, like “liberal” or “conservative.”

Twitter banned ads and all paid promotion of content by candidates, political parties, government officials, PACs and certain political nonprofits in November 2019, in a climate of rampant misinformation on social media leading up to the 2020 election.

Twitter had been carrying little political advertising in any case (under $3 million worth for the 2018 midterm elections).

Other major social platforms did not follow suit immediately. However, Facebook implemented such a ban just prior to and after the 2020 election, lifting it in March 2021. Facebook also made it possible for users to block political advertising.

About half of Twitter’s largest advertisers have suspended advertising on the platform due to brand safety concerns caused by new owner Elon Musk’s multiple changes and reversals of account verification policies, massive layoffs, and other erratic moves.

Predictably, responses to Twitter’s announcement about loosening political and cause-related ad policies ranged from elation (“Excellent”), to predicting that users “can now expect political ads with lies in them,” to a demand that Musk live up to his promise that no policy changes would be made without polling users first, to calls for users to block all political ads.