What's On Deck For 'Mobile' At CES This Week: Not Much 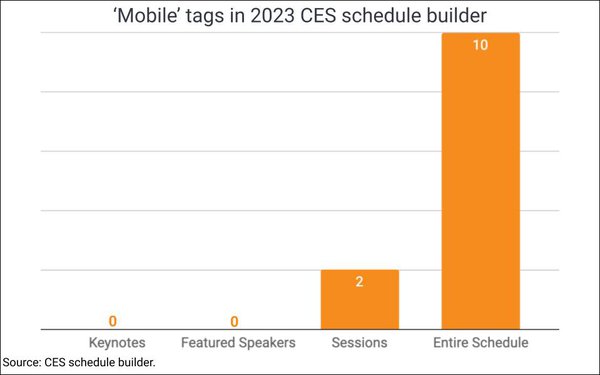 With the annual CES show kicking off in Las Vegas this morning, I figured I'd use it as an opportunity to see what's in store for mobile at the annual consumer electronics mecca, but when I used the conference's schedule builder to search "mobile" tagged content, I was surprised to see not one of the keynotes or features speakers was identified that way.

When I broadened my search to include featured "sessions," two were tagged for mobile, although neither are arguably about mobile media explicitly. One is a session discussing how 5G's rollout is accelerating the mobile gaming industry, while the other -- "Digital Disruptors" -- was likely tagged that way because it includes Mobile Electronics Association President Chris Cook on a panel described as "key players for disruptive technologies that are or could change the connected car space in the future," which  "will explore the diversity of artificial intelligence and machine learning applications and attempt to understand how they can disrupt to develop a better class of transportation."

Subtracting those two features panels from the conference's entire schedule, only a couple are explicitly about mobile media, if you exclude the greater notion of "mobility," especially as it relates to new connected automobile tech.

And yes, cars arguably were one of our first mobile mediums -- it's even part of the word automobile -- but during their first century, it was mostly about terrestrial or satellite radio or installed entertainment systems.

And while 5G rollout clearly is changing the game of all media connectivity -- including cars -- CES 2023 illustrate how mobile media is actually just baked in to the broader consumer and business technology infrastructure and is no longer a separate medium in the way we normally think of mass media.

If you've been following my "Mobile Insider" dispatches over the past couple of years, you'll know that this is a running theme with me, and it's not because I'm trying to deprecate the role or power of mobile media technology. Quite the opposite. I believe it has and will continue to unlock uses of of media in ways that can make almost any media experience possible.

That said, industry stat keepers like Statista note that "mobile advertising" is approaching $400 billion annually (even if none of the major agency holding companies even include it as a line item in their annual advertising forecasts anymore).

However all those ads are showing up on the smartphones of 6.6 billion global users, we all have to ask ourselves whether we actually even think of them as "mobile ads" -- or just, well, ads.

Stay tuned  for more CES updates this week in other parts of MediaPost.