'The Way Home' On Hallmark Is Gem Of A Drama 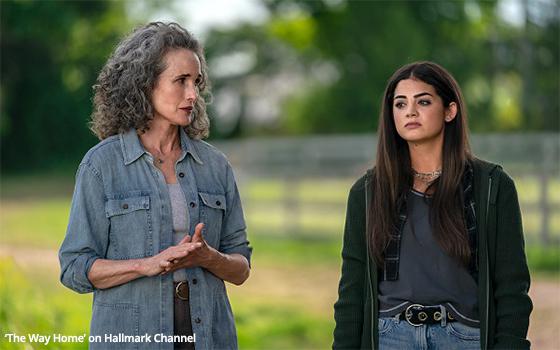 In the business of watching TV shows for a living, a new TV show that deviates from the norm, such as the exceptional new series “The Way Home” on Hallmark Channel, is as welcome as a spring day.

What is the norm? Very generally speaking, it is scripted dramas characterized by grindhouse violence, docuseries that rehash the most heinous, headline-making crimes of the recent past in lurid detail, and so-called comedies that more often than not have forgotten their reason to exist which is to help us laugh.

In large measure, TV today is an unhappy place that thrives on misery. In reaction, some people look for alternatives, and they are doing so in numbers sufficient to support the few places where they might find safe haven.

The foremost of these destinations is Hallmark Channel, about which people fall into two camps. They either regard its content as corny, treacly and out of touch with reality, or they love it for those very same qualities.

However, these diverging points of view probably stem primarily from Hallmark’s famed motherlode of original Christmas movies and the movies’ reputation for looking at the holidays through rose-colored glasses that are a little too rosy for some.

But Hallmark develops and airs a handful of scripted series and its newest one -- “The Way Home,” premiering Sunday night -- is a gem.

Set primarily in a close-knit, rural community in New Brunswick, Canada, the show focuses on three generations of women in the same family who are all experiencing a degree of estrangement from each other.

In this show, “Home” is a farm that has been in this family’s possession for generations. In the show, Kat is going home for the first time in 20 years. For Alice, who is a troubled teen recently expelled from her Minneapolis high school, it is her first visit.

The Hallmark Christmas movies are well-known for their going-back-home storylines, but “The Way Home” is more than a few cuts above and stands on its own.

I was very moved by the premiere episode I watched on Wednesday, and I was in awe at the way this show has been written and put together.

Among other things, it ties past and present together in a way that is difficult to bring off, but succeeds at it brilliantly.

Let the record show that I have also enjoyed my share of violent, grim, adult TV series. One example was the superlative new post-pandemic drama “The Last Of Us,” reviewed here just yesterday.

Like other such dramas, “The Last Of Us” asks the question: Is humanity worth saving? “The Way Home” provides an answer, and the answer is yes.

“The Way Home” premieres on Sunday (January 15) at 8 p.m. Eastern on Hallmark Channel.