People In Trouble Do The Darndest Things In New 'Night Court' 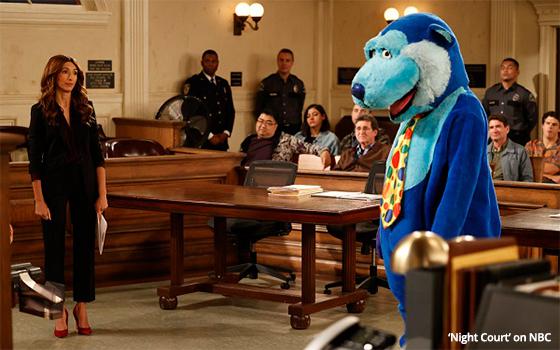 The darndest things seem to happen in “Night Court,” the TV version of Manhattan’s night courts.

Do the world’s wackiest people walk in the door without notice at any time in the real night courts of lower Manhattan?

I have no idea, but for the sake of the new “Night Court” premiering on NBC Tuesday night, it is certainly more befitting of a sitcom that only funny people charged with unusual misdemeanors or quality-of-life crimes parade in and out of the fictional nighttime courtroom of Judge Abby Stone.

A case in point: The guy in the photo above in a big blue costume (maybe a bear?) who is in court to face a charge of public urination. Golly! That New York sure is a crazy town!

In this particular court, the big blue urinator (alleged urinator, I should say) will face the newly minted presiding judge, played by the always cute and adorable Melissa Rauch from “The Big Bang Theory.”

She was a part of that storied series for nine out of its 12 seasons and it made her a star -- so much so that the new “Night Court” has largely been built around her.

It is great to see her back on prime-time TV and doubly great that she has left her squeaky, high-pitched voice from “The Big Bang Theory” behind.

I used to watch her maintaining that voice year after year on “Big Bang” and wondered what kind of fortitude it took to keep that up for nine seasons.

The voice is nowhere to be heard in the new “Night Court,” which is a revival of the old and reasonably well-liked “Night Court” whose run on NBC ended 31 years ago in 1992.

In the new one, Judge Abby Stone is positioned as the daughter of the late Judge Harry Stone, played in the original by the late Harry Anderson.

Harry Stone was the presiding judge in the old “Night Court,” and here in the new one, daughter Abby is following in his footsteps.

The original “Night Court” boasted a stellar cast, most of whom sadly are no longer with us. They include (in addition to Harry Anderson): Markie Post, Selma Diamond, Florence Halop and Charles Robinson.

Richard Moll, who was so memorable in the role of bailiff Bull Shannon, is now 80 and nowhere to be seen in the first two episodes of the new “Night Court” that the TV Blog previewed last week.

But of all of the former stars of “Night Court,” perhaps the best-known of them was John Larroquette. Now 75, he was apparently ready, willing, able and available to come back in the role of Dan Fielding.

In the new “Night Court,” the character is as acerbic and caustic as ever. He is also long-retired from the legal profession and wishes to stay that way until sunny Abby Stone arrives at his doorstep to coax him back to court.

In the old show, Fielding was the assistant DA assigned to Judge Stone’s court. Here in the new one, he is being lured back for a very different courthouse role.

So, how is this new “Night Court”? The answer is that it is everything one might expect from a three-camera prime-time sitcom on one of our legacy broadcast networks.

As such, it is all wisecracks all the time, each one followed by gales of canned laughter. Who knew that Manhattan’s night courts were so hilarious?