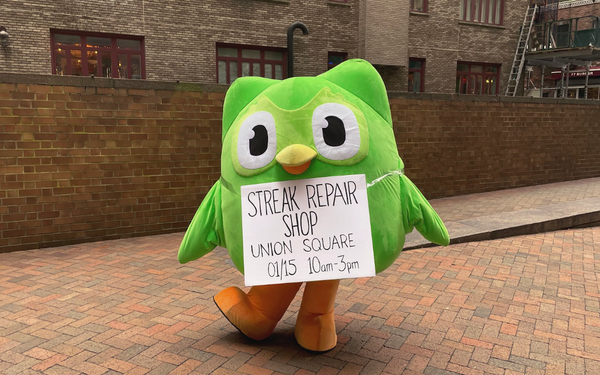 It's Quitter's Day, the second Friday in January that marks the evaporation of most New Year's resolutions. But Duolingo isn't letting people off the hook that easily. The popular language app is running a campaign to save people from failed language-learning resolutions. Animated billboards call people out by name. Sidewalk decals remind people to get back to the app, and so do fortune cookies that the company is distributing in key markets, including Chicago and California.

And Duo, the company's giant green mascot, has been wandering New York City, reminding pedestrians and subway riders that no one is safe from the company's relentlessly guilt-inducing antics.

"We always see such a lift in people learning languages in the New Year, and then people give up on it -- like lots of resolutions," says James Kuczynski, creative director of marketing and brand. "It's a natural tension point. And since people know us as a brand that will stop at nothing to keep them learning, Quitter's Day seemed like a natural fit."

He tells Marketing Daily that the company is also running a one-day "Streak Repair Shop" in New York, recognizing how essential streaks are to motivation. "There are a million people that have a streak longer than a year with us, which is amazing," he says. "And if they lose it, they become less engaged. We want to re-engage them."

About 70% of the app's daily active users have a streak longer than seven days.

Kuczynski says Duo will play an increasingly prominent role in campaigns as the mascot gains popularity. "When we had him out in New York in December, it led to a ton of user-generated content, creating more impressions than paid media, so we'll highlight Duo a lot more."

It's hard to say what people find so compelling about the bossy bird. "There are so many sides to Duo," Kuczynski says. "He can be motivational and even passive-aggressive."

The company even made fun of his overly zealous approach in a recent spot.

Duolingo's looking to expand its use of other brand characters, too. "It builds more love for the brand," Kuczynski says.

Duolingo, the world's largest mobile learning platform, says English remains the most popular language to learn globally and ranks #2 even in the U.S. Next come Spanish, French, German, Japanese, Italian, Korean, Chinese, Russian and Hindi. This year, it also saw a surge in Ukrainian language learning.

The app is free. The fast-growing Pittsburgh-based company makes money selling premium versions and ads served to users. In its most recent quarterly results, total revenues jumped 51% to $96 million. Daily active users also increased by 51% to 14.9 million, compared to the year-ago period. And its net losses fell to $18.4 million, down from a loss of $29 million in the prior year quarter.