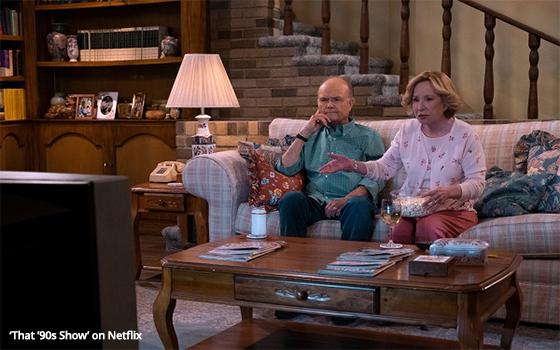 "That ’70s Show" has now morphed into “That ’90s Show,” a new show that starts streaming Thursday on Netflix.

"That ’90s Show" is a sequel to the old one, and features some of the original characters and cast members from the old one too.

In the new show, the former teenagers are now long grown up with teen children of their own. This group of teens and their friends assume the same positions in the show as their parents before them.

If this seems complicated, allow me to make things even more complicated with this time line of the “That ’70s Show” universe. I am doing this so you don’t have to.

Assuming that his childhood friends were all around the same age, then they too must be in the latter half of their 30s in the new show, which starts 19 years after “That ’70s Show” began in 1976 and 16 years after it ended in 1979.

The age group targeted by “That 70s Show” was one that TV networks and their sponsors wanted to reach back then, and still do -- generally speaking, adults in their late 30s and early 40s.

“That ’90 Show” is designed for roughly the same reason -- to appeal to a group similar in age with a sitcom reflecting the way they grew up in the 1990s.

Now that Netflix is in the business of ad sales, look for more of this kind of “targeted TV” on the streaming service’s content menus.

As for “That ’90s Show,” it is a sitcom out of the network mold. Each character’s every utterance is met by a tsunami of prerecorded laughter and the characters talk louder to each other than anyone in the real world ever does.

The show veers into familiar tasteless territory when two offhand remarks are made about a teenage girl’s biological development in the show’s first two minutes. One-liners about vaginas arise about seven minutes into Episode One.

One is the show’s 1990s time frame. The other is the availability of the former stars of “That ’70s Show” to make appearances on the new one. When each one enters a scene, wild cheers erupt from an unseen audience (or possibly from a recording of similar whoops from sitcoms long ago).

Topher Grace and Laura Prepon are back as Eric Forman and Donna Pinciotti, who are now married with a teenage daughter.

Ashton Kutcher and Mila Kunis are also back as Michael Kelso and Jackie Burkhart, who have divorced and remarried three times. They have a teenage son who is just like dad. Wilmer Valderrama -- the irrepressible Fez -- will be seen later in the new series.

Debra Jo Rupp and Kurtwood Smith (pictured above) are back as the parents of Eric Forman whose house was the principal gathering place for the teen friends in “That ’70s Show."

Of all of the stars of “That ’70s Show,” the Forman parents seem like the only ones who will be seen in every episode.

Even Eric and Donna Forman leave fictional Point Place, Wisconsin, at the end of Episode One after leaving their teen-aged daughter with her grandparents for the summer.

netflix, streaming, television
1 comment about "From 'That '70s Show' To 'That '90s Show': A Chronology".
Check to receive email when comments are posted.
Next story loading