Despite Thumbs Down, Two Network Sitcoms Are Thriving 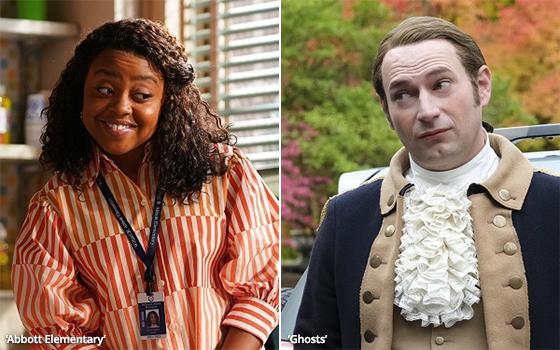 Two network sitcoms on TV right now -- “Abbott Elementary” and “Ghosts” -- could not be more different, yet they have at least one thing in common: They were both panned here in the TV Blog, but nevertheless went on to fame and fortune. Big surprise, right?

“Abbott Elementary” is the ABC workplace comedy about an inner-city public school in Philadelphia. Quinta Brunson (above photo, left) is the show’s creator, producer, writer and star.

“Ghost” is a CBS sitcom about a young couple who inherit an old mansion in upstate New York that is populated by eight funny ghosts. One of them is a dead, gay militiaman from the American Revolution (played by Brandon Scott Jones, above right).

Oh, well, nobody really listens to a TV critic anymore, though I can be satisfied in the hope that readers might still enjoy reading these things.

My bigger concern is the question of whether or not I am in tune with the tastes of the TV-viewing masses and whether that even matters.

Take these two sitcoms. My negative reaction to “Abbott Elementary” centered on one scene in the premiere episode in December 2021 in which one of the young elementary-school students was seen urinating on a classroom rug. I felt that this was in bad taste.

Here is what I wrote then: “A small child is positioned as being no more controllable than an un-housebroken dog in a new ABC sitcom premiering Tuesday night. …

“The only consequence of this act was that the rug had to be sent out for cleaning. Later, it dawned on me: The makers of this show have made a child character who is on par with an untrained puppy …”

There was more on this subject, but you get the picture. I concluded from one episode of “Abbott Elementary” -- the pilot -- that the show was tasteless.

I have no idea if it continued to be because I never returned later to take a look at how it was doing.

Since its premiere, ABC has been well-satisfied with the show. Among other reasons: The show does very well in the days after its live airing.

A case in point was last September’s second-season premiere. Viewership for the live airing amounted to 2.92 million. When the plus-7 numbers were added to it, the show’s audience hovered around 7 million, according to reports.

Along the way, the show has been showered with accolades, most notably a Best Comedy Golden Globe earlier this month and an Emmy for Best Writing last September.

And yet, the TV Blog decided to focus on a little boy urinating on a rug way back in the show’s premiere episode and then condemn the whole thing, with no inkling or expectation that the show would be embraced by the marketplace.

In October 2021, I took “Ghosts” to task, basically, for its silliness. Its storyline about light-hearted, comedic ghosts who were not visible to their human hosts reminded me of TV in the 1960s, which was a particularly silly decade for prime-time television.

For me, “Ghosts” had hints of “Bewitched,” “The Ghost and Mrs. Muir” and “I Dream of Jeannie,” to name just three of the era’s far-fetched sitcoms.

“A new fall sitcom premiering Thursday night on CBS feels like a throwback to the wacky world of 1960s television,” I wrote in the review’s lead sentence. “This is not intended as a compliment.”

Of the above gay militiaman character, I wrote: “He is the kind of ridiculous character who might have been played by Charles Nelson Reilly or Paul Lynde in another era of television.”

Rereading this review now, I am floored by it. Where on earth did all this vitriol about the 1960s TV shows come from?

Do you want to the truth? I love the ’60s shows! Charles Nelson Reilly and Paul Lynde? I loved them too.

What was I thinking? If I had it to do over again today, I would embrace “Ghosts” for the very reason I condemned it then. Its silliness is its strength, not its weakness.

Now in its second season, “Ghosts” was renewed for a third season earlier this month. By all accounts, CBS and its parent company Paramount Global are very happy with it. It is reportedly doing very well on Paramount+ too.

education, paramount+, television
1 comment about "Despite Thumbs Down, Two Network Sitcoms Are Thriving".
Check to receive email when comments are posted.
Next story loading