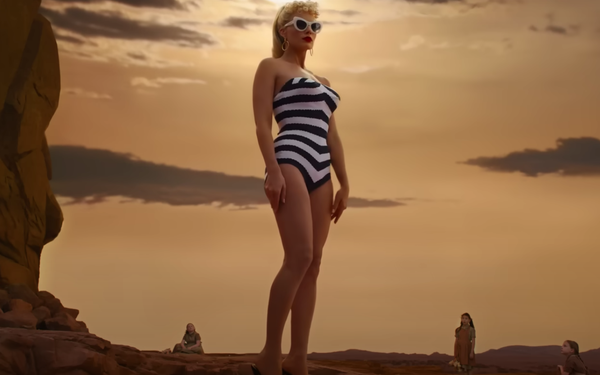 Image above: Margot Robbie in character as Barbie for the eponymous movie, set to release this summer.

Mattel is introducing My First Barbie, making the fashion doll taller, tamer and preschooler-friendly. With bendable limbs and longer hair, she’s built to allow children as young as three to play with, even with limited finger dexterity.

Multiple reports describe the new Barbie as 13.5 inches tall–2 inches taller than the traditional version. Her waist is larger, which helps play down Barbie’s bust. And she’s got “modesty” undergarments that are permanently attached.

“We talk to parents and kids almost 365 days a year,” Lisa McKnight, vice president and global head of Barbie and dolls, tells the Associated Press. “We started hearing a theme around younger kids wanting to play with Barbie. Parents were concerned that their children at the preschool age didn’t have the fine motor skills to have a positive play experience with our traditional fashion doll.”

That’s not so surprising. Throughout her 63-year career, Barbie -- or more formally, Barbara Millicent Roberts -- has courted controversy, and become a sharp-toed  Rorschach test for parents. Some see her as a fashion doll their kids adore. Others -- including plenty of academic experts -- see her as weaponized misogyny, linked to eating disorders and distorted self-image in kids as young as 3.

Recent her popularity soar, with sales doubling in the last five years. Besides the dolls and accessories, Mattel has fueled the franchise with an ever-growing ecosystem of video and digital properties, including NFTs.

But there are signs her popularity may be fading. After two full years of double-digit gains, Barbie revenue fell 3% in Mattel’s most recent quarterly results, and it expects more “slight” declines in the fourth quarter.

The company says it is confident that Barbie isn’t losing her appeal. Barbie “continues to be on the forefront of cultural conversation,” said Richard Dickson, Mattel’s president and chief operating officer, in a call webcast for investors. He points to successful initiatives, highlighting inspiring women–including a doll honoring famed conservationist Jane Goodall and a new slate of content on Netflix.

And it’s hoping for buzz from the Barbie movie, now in post-production and scheduled for release this summer. It stars Margot Robbie (seen above) in the title role, with Ryan Gosling as Ken. Greta Gerwig, who directed “Lady Bird” and “Little Women,” directs. She also co-wrote the feature with partner Noah Baumbach.