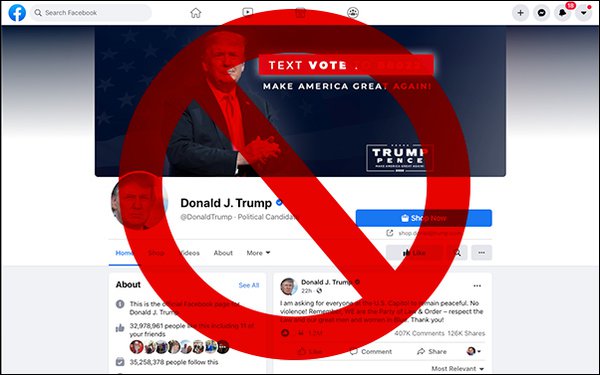 Meta should reject former President Donald Trump's request to reinstate his account on the social media platform, a coalition of watchdogs say in a letter to company CEO Mark Zuckerberg.

“President Trump repeatedly violated Meta’s rules,” the Change the Terms coalition writes. “He used Facebook to spread hate and racism against people of color, targeted Black women and women of color politicians, spread misogyny and white supremacy, used your advertising platform to target xenophobic campaign ads to potential voters, repeatedly spread lies about the integrity of our electoral process to undermine our democracy, and used your platform to incite a violent insurrection.”

The letter adds that Trump's return to Meta “would surely embolden a base of existing supporters, who believe that such violence is justified if it means returning Trump to power.”

Meta said in 2021 that the suspension would last for at least two years -- meaning that Trump's account could be restored as early as this month.

In its letter, Change the Terms -- which counts advocacy groups Free Press and Southern Poverty Law Center among its members -- calls Zuckerberg's attention to a draft report by the House Select Committee that investigated the attack on the Capitol.

"The committee observed that although President Trump could soon return to social media, 'the risk of violence has not abated,'” the letter states.

That draft, published this week by The Washington Post, said social media platforms' “delayed response to the rise of far-right extremism -- and President Trump’s incitement of his supporters -- helped to facilitate the attack on January 6th.”

In July of 2021, Trump sued Twitter, YouTube and Meta, claiming that the companies violated the First Amendment by blocking his accounts.

The First Amendment prohibits the government from censoring speech, but doesn't typically apply when a private company suppresses speech. But Trump's lawyers contended his ban implicated the First Amendment, arguing that government officials coerced the companies into blocking his speech.

Last May, U.S. District Court Judge James Donato in the Northern District of California threw out the complaint against Twitter, ruling that Trump had not established the company was coerced by the government.

“The comments of a handful of elected officials are a far cry from a 'rule of decision for which the State is responsible,'” Donato wrote. “Legislators are perfectly free to express opinions without being deemed the official voice of 'the State.' Government in our republic of elected representatives would be impossible otherwise.”

Trump appealed that decision to the 9th Circuit Court of Appeals. It's not yet clear how Musk's decision to reinstate the account will affect the legal proceedings.

Judges presiding over Trump's lawsuits against Meta and YouTube halted proceedings in those matters until the 9th Circuit issues a decision in his case against Twitter.