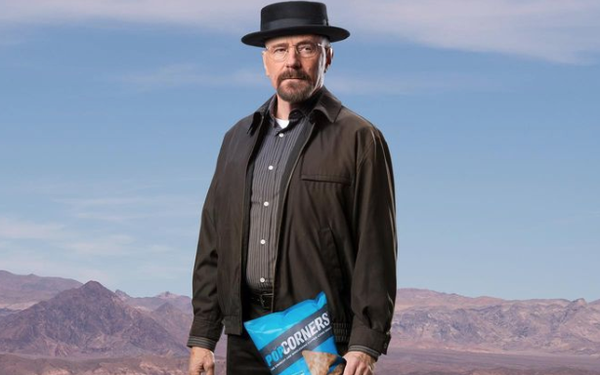 Earlier this month, PopCorners posted an image of actor Bryan Cranston on social media holding a bag of its white cheddar chips.

The PepsiCo brand subsequently revealed that Cranston will appear in a Super Bowl ad reprising his Walter White character from the “Breaking Bad” series about a teacher-turned-methamphetamine dealer that ended in 2013.

In this spot, Pinkman sits in his now-iconic lawn chair watching the sun set over the desert.

As the camera pans, viewers see a second but empty lawn chair near Jesse and Walt’s infamous RV—which “Breaking Bad” devotees will recognize as the original vehicle used throughout the series.

Inside the TV, a phone rings and a voice is heard saying “Yo. What’s up?”

According to a PopCorners rep, the last piece of the puzzle will be “what roles Walt and Jesse break into this time.”

Moving to Pringles: For the first time in five years, the Kellogg's brand will feature a celebrity in its Super Bowl ad—but Pringles is being very coy about who it will be.

This Pringles post on Instagram and Facebook doesn’t directly reference the Super Bowl but it includes the hashtag #StuckInPringles, the words “tick tock, tick tock” and 2.12.23.

#StuckInPringles refers to last year’s Pringle commercials in which people who reach for the last crisp in the long, narrow can get stuck and end up wearing it in various scenarios.

A Pringles rep says the faceless, pink-garbed celebrity in the social media post will get “stuck” in this year’s Super Bowl spot.