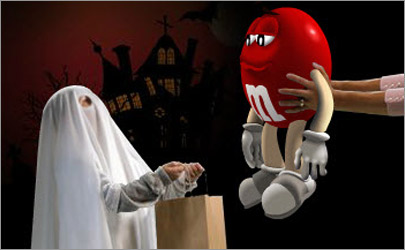 In the spirit of Halloween, NetBase recently (Oct. 1) analyzed a year’s worth of activity across 95 million social media sources, using its Brand Passion Index to compare buzz and consumer passion for five leading candy brands and that old Halloween favorite, candy corn.

The clear winner on buzz: M&M’s, with 42% of the overall social media chatter. Verbatim comments about the iconic brand suggest that its popularity and high buzz have much to do with its colors and wide variety of candy options and a high nostalgia quotient, according to NetBase.

Skittles is in second place on buzz (24%), but has even higher “passion intensity” and “net sentiment” scores. Skittles pulled 89 on passion and 74 on net sentiment, versus M&M’s’ 80 and 73 scores, respectively.

Passion intensity scores were 73 for SweeTarts, 65 for Tootsie Rolls, 48 for candy corn and 45 for Reese’s.

Net sentiment scores were 87 for SweeTarts, 77 for Reese’s, 58 for Tootsie Roll and 52 for candy corn.

By the way, the National Confectioners Association reported that Americans buy more than 20 million pounds of candy corn per year (at least as of 2004). And the top brand, Brach’s, sells enough candy corn each year that if the kernels were laid end-to-end, they would circle the earth 4.25 times, according to “Farley’s & Sathers Candy Company’s Fun Facts.”