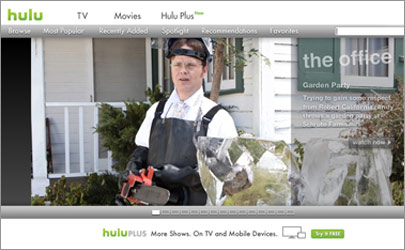 Owners of Hulu, the premium TV site, say it is now not selling the digital video service. Hulu CEO Jason Kilar has said Hulu is forecast to make around $500 million in revenue this year, up from $263 million in 2010. He says the company is profitable.

After months of talks, spurred by an initial inquiry from Yahoo,  the voting owners -- News Corp., Walt Disney, and Providence Equity Partners -- say the service is now too valuable to give up  just yet.

“Hulu holds a unique and compelling strategic value to its owners," owners News Corp., Walt Disney and Providence Equity Partners stated. NBCUniversal remains an owner, but gave up oversight when it was bought by Comcast.

Hulu has been a rapidly growing online area. But many believe it still isn't doing enough -- especially in the area of big monetization, including getting consumers to pay for part of the service, started this past year under Hulu Plus. The main part of advertising-supported TV service, Hulu, has been free to consumers who have Internet access.

At present, it has more than 1 million subscribers for its $7.99-per-month Hulu Plus service.

Walt Disney's President and Chief Executive Officer Robert Iger had been pushing to sell the service, while Rupert Murdoch, chairman/CEO of News Corp., has been on the fence.

Hulu attracted offers from Google, Amazon, Yahoo and Dish Network. Dish, which recently bought Blockbuster and started its own online streaming service, had bid $2 billion. Google put in a bid somewhat higher than that -- but it wanted guarantees from the TV network and producer owners for a certain level of TV programming content for the service.

That proved to be somewhat of a sticking point.

Analysts say grabbing big TV content might be costly in future years. For example, Netflix balked at paying an estimated $300 million a year for Disney and Sony movies through pay TV channel Starz. Other analysts believe that Hulu's value may have fallen as a result of consumers' complaints about other digital providers -- specifically, a 60% price hike from Netflix.