Geeking Out In Soho 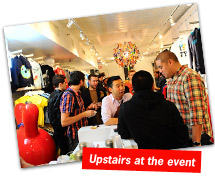 Last Wednesday’s GeekChicDaily and TOKYOPOP launch party at Kidrobot in SoHo was the perfect way to escape the fall drizzle and NYC mud/crud puddles. I had been skipping around the office all day saying that I was going to a party at a robot store (note: Kidrobot is definitely not a robot store, but a geek-friendly destination for collectible tchotchkes and silkscreened hoodies and whatnot), so I was a little disappointed that Rosie from “The Jetsons” didn’t greet me at the door to put my wrist band on. My disappointment faded when I walked in to find two bars and cater waiters with their hands full of little baby cheeseburgers (can we stop c 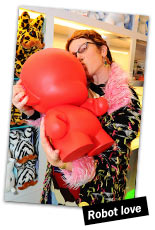 alling them mini or sliders?) and spicy macaroni cones.

Kidrobot was decked out in GeekChicDaily and TOKYOPOP signage that blended in so well with the store that I had to ask if it was temporary. It was. In fact, it had just been put up for the party. Peter Levin, CEO/CoFounder of GeekChicDaily, was wandering around in a cute little cardigan and sneakers, looking very geek chic. He was very excited about the launch and seemed in his element among the geeky toys and techy attendees. GeekChicDaily bills itself 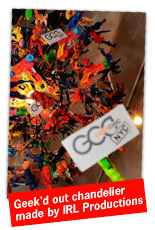 as the leading pop culture, opt-in email newsletter and cross-platform content publisher, and the reason for the event was their new partnership with TOKYOPOP, an Asian pop culture publisher.

Soon-to-be-launched luxury car service GroundLink sponsored the event and provided free rides to Kidrobot via app and GPS location.  I was already on thin ice with GroundLink -- after being chosen as one of the “testers” of the service, I was summarily kicked off for abuse -- so, I arrived at the party via the 6 train. I didn’t even know that GroundLink was sponsoring the event until the day of, when I really looked over the invite. Ain’t that a kick in the head?

I sheepishly went up to Melissa Trosterman, GroundLink’s senior magager of social media marketing, and introduced myself, shamefully. Luckily, she was really nice, and we ended up chatting for most of the time I was there, though she did not offer to reinstate my privileges. Come on, GroundLink! Take me back -- I’ll never abuse you again!

Actually, that’s a lie. The service is so easy to use that it’s impossible not to take it all the time. All you do is queue up the app, tap “ride now,” and then it finds your location using GPS, sends a car, and within 10 minutes you’re cruising the streets of Manhattan in an Escalade, watching a movie in the backseat. 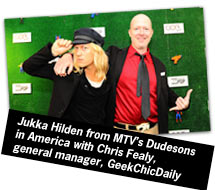 Jim Gaffigan, the pasty comedian, was there. He was incredibly rude to my plus-one, Persia Tatar, when she geeked out and told him she was a fan. Fan no more, Gaffy.

Besides Pasty Pants Gaffigan, everyone else was really nice. I met Roni Haim, CEO of Zlango, a company that spe 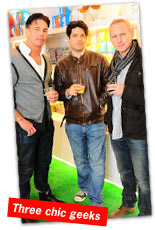 cializes in mobile icon messaging. He gave me a tutorial of the service and then gave me a Zlango-logo-emblemized jump drive. They just paired up with “The Walking Dead” (the comic book that spawned the TV show) and you can get “Walking Dead” skins on their app. They also provided the bangin’ gift bags for the event (the actual bags, not the stuff inside).

Kidrobot is down the block from Dean & Deluca and I wanted to get some fancy desserts before they closed, so I headed out back into the rain about an hour after I arrived. I opened the gift bag on the subway and found some cool stuff -- including a mini bottle of acai-infused vodka that I may or may not have sucked down on the platform.

There were also other celebs there! Jeannie Gaffigan, Jukka Hilden (Dudesons), Mich Mathews

Photos courtesy of GeekChicDaily and Sunny Norton for Guest of a Guest.

If you want me to cover your party, email carrie@mediapost.com