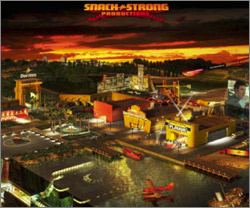 Consumer groups have filed a complaint with the Federal Trade Commission, alleging that PepsiCo and its Frito-Lay business are engaging in deceptive and unfair practices in marketing to teens and children.

The Center for Digital Democracy, Consumer Action, Consumer Watchdog and the Praxis Project allege that Frito-Lay is engaging in “covert” advertising/marketing efforts through “immersive experiences” including social media and video games, collecting users’ personal information without adequate disclosure, and using information in ways that are inconsistent with its privacy representations.

The complaint specifically alleges that Doritos is using “Snack Strong Productions” (an area to which Doritos.com visitors are directed upon entering) to make its promotional videos/games/online events seem to be emanating from an “online entertainment company.”

A few of the specific examples cited as being used to engage in deceptive marketing practices include the “Crash the Super Bowl” UGC video contest, the “Unlock Xbox” UGC video game, horror-themed game site Hotel626, and online experiences such as a “global music event” on Doritoslatenight.com that featured Rhianna and other popular performers.

The FTC told the New York Times that it will review the complaint carefully. PepsiCo has not yet issued a response to the complaint.

The complaint is based on research conducted for a new report from the National Policy and Legal Analysis Network to Prevent Childhood Obesity. The report details food/beverage company digital marketing practices that it contends “pose particular threats to children and youth, especially when used to promote foods that are high in fat, sugars, and salt, which are known to contribute to child and adolescent obesity,” states the complaint.

The methods criticized in the report – to which, say the researchers, teens are “uniquely susceptible” --include creating immersive environments (using state-of-the-art animation, high-def video and other multimedia applications); “infiltrating” social networks by using prizes, free products and other incentives to get teens to interact with brands and share their marketing messages/content, as well as tracking users’ online behavior without adequate notice; using location-based and mobile marketing/incentives for purposes including “triggering cravings” at “the exact point when a teen is near a fast-food restaurant”; using incentives/engagement tools to collect personal data used to hone/personalized marketing efforts; and using “neuromarketing” techniques based on scientists’ brain research to “trigger the unconscious.”

While the report identifies numerous examples of use of such techniques by various food and beverage companies, the complaint contends that Doritos’s efforts are “particularly problematic,” as PepsiCo/Frito-Lay has “pioneered a strategy for marketing to teens that other companies are just now beginning to embrace.”