Hyundai Rolls Out Veloster For ... Whatever 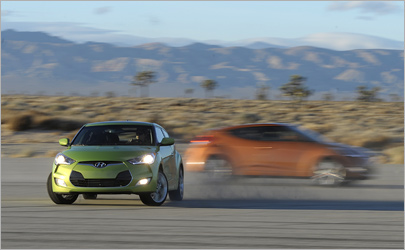 Hyundai Motor America (HMA) brought a fleet of new Veloster cars to the New York metropolitan area on Tuesday to give reporters both a rundown on the vehicle and a chance to drive it from the waterfront of Hoboken, N.J., on up the Hudson River.

If the drive took the cars through familiar, well-traveled territory, the car occupies a region of the market that is terra incognita in terms of market potential and even defining precisely what the vehicle is: it’s not quite a coupe, but not quite a sedan, not quite a sports car, but not your basic Accent. In short, it competes with cars that are not intended so much to garner huge volumes as added personality to a region of the market that is traditionally packed cheek by jowl with boxes on wheels.

It’s a good time for Hyundai to experiment. Scott Margason, director of product planning at HMA, began a discussion about the vehicle by summing up Hyundai's remarkable ascendance over the past five years, although one could reasonably go back to the advent of the company's 10-year, 100,000-mile guarantee early in the millennium as the point of turnaround.

And the strategy is still going as Hyundai this year extended its Assurance program (launched during the recession, and offering to buy back cars from people who lost their jobs) with a trade-in value guarantee, which does for consumer perception of residual value what the 10/100 warranty did for perception of quality back in 2001. "We wanted to focus on trade-in value because there's still the perception that Hyundai resale value isn't as good as others, and that's not the case," said Margason.

Trade-in value or not, Hyundai's retail sales are up 31% this year and market share in the third quarter was 5.6%, achieved with the lowest incentive spending -- down 38% year-to-date through September versus 10% for the industry -- of any mass-market brand, he said. Margason added that March was, in fact, the first month in the Seoul, Korea-based company's history in which the U.S. market became its volume leader.

"Consideration for Hyundai is at an all-time high," he said, citing GfK data showing the Fountain Valley, Calif.-based company enjoys 36% consideration, and is closing in on Nissan’s 42%. The other car Hyundai launched this year was the 2012 Accent, which in July -- its first month of sales -- topped volume for subcompacts at about 7,000 units, followed by Nissan Versa, Ford Fiesta, Honda Fit and Chevy Aveo, per the company.

Margason said marketing for the new Veloster car aims to reach Gen Y consumers with a tripod strategy focused on sports, music and technology. TV spots, with an "Engineered for whatever" tagline and voiceover by actor Jeff Bridges, show the vehicle's flexibility, on-board technology, visual profile and appeal to different -- if disparate -- lifestyles.

The ads are feature-centric, touting the vehicle’s third rear door (it's somewhere between a coupe and a sedan as it has only one door for back seaters), the fact that the car is an "octane sippy cup," that on-board technology is stacked with things like Blue Link telematics that also has things like "geo fence" where people (think parents) can be notified if the vehicle wanders beyond certain geographic parameters. Also spotlighted are the seven-inch multimedia touchscreen that integrates all entertainment and telematics with a visual matrix of icons.

One ad has a couple of cops pulling up on motorcycles on either side of the car, but they say nothing because you can text and drive without getting a ticket, via voice recognition technology.

Senior Product Manager Brandon Ramirez explained that the car's purpose is to be a kind of reverse halo. Typically a halo car is a desirable vehicle at the high end of an automaker's portfolio that lends some of its sparkle to other cars in the showroom. In this case the automaker is hoping to create a kind of halo car at the low end to entice younger buyers looking for an affordable car (Veloster starts at around 17 grand) that isn't an appliance with wheels, but one "Where people will find emotion and high image," he said. "And when you compare it with the other cars in our lineup, it’s highly differentiated."

Those other cars are more the more traditional Accent subcompact and Elantra compact car. As far as the competitive goes, the company is positioning the car, which is being built in Ulsan, Korea, against other Dr. Dolittle-esque vehicles like Scion tC, Honda CR-Z, VW Beetle and Mini Cooper Countryman.

The car's telematics/entertainment platform includes Gracenote album cover art and voice recognition through iPod and Pandora internet radio through iPhone, and it even has a couple of fuel-economy games: Blue Max which, over a 10-minute period, gauges how economically you drive, and Eco Coach, which tracks fuel economy at precise times. And it even has design elements intended to evoke motorcycle cues, such as a profile slightly reminiscent of a motorcycle helmet and a motorcycle-like RPM and velocity binnacle.