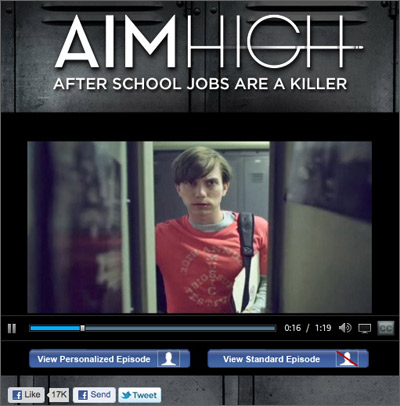 What does social video look like? A consumer-generated, instantly sharable YouTube clip, sure -- but Warner Bros. has other ideas with big implications for the future of premium Web video.

(Like most “firsts,” this claim is debatable. While he’d already cut ties with Disney, for instance, Michael Eisner should be credited with backing the popular Web series "Prom Queen" back in 2007.)

A first of its kind or not, “Aim High" encourages views to engage with the show by incorporating their Facebook profile information, including photos, text and friends, into the series.

To take part, viewers have to opt into the application on the show’s Facebook page, or register on Cambio -- a joint video venture between AOL, Jonas Group and MGX Lab -- and then link the account to Facebook.

By choosing to watch “Aim High” in a personalized viewing mode through the show’s Facebook page or on Cambio, viewers are able to see themselves or their friends integrated into select scenes throughout the series -- from their photo appearing on a student body election poster, to having their name seen as graffiti on the bathroom wall.

“'Aim High' is really a giant step forward for entertainment,” said McG, Producer of the show. “I'm excited to see how fans will react.”

Bumping up the social component, fans of the show can also post comments and Tweets related to their shared experience.

But, Warner Bros. does plan to stop there. “We're already exploring ways to develop this technology further and offer additional immersive features," said Thomas Gewecke, President of Warner Bros. Digital Distribution.  What does Gewecke have in mind? We’ll just have to wait and see.