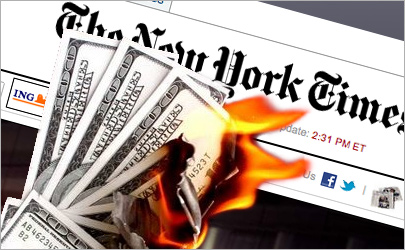 For at least a decade, newspaper publishers have been looking to the huge potential growth offered by digital advertising revenues -- but now, 10 years on, digital revenues still make up a relatively small part of the business. Worse, slow growth in digital advertising means it’s unable to offset the precipitous, ongoing decline in print revenues.

What’s more, the growth rate for online newspaper ad revenues remains anemic. Following seven straight quarters of declines from the second quarter of 2008 to the fourth quarter of 2009, online ad revenues grew 10.9% from $2.74 billion in 2009 to $3.04 billion in 2010 -- compared to overall online ad industry growth of 15% (to $26 billion), according to the Interactive Advertising Bureau.

More recently, in the first and second quarters of 2011, newspapers’ online ad revenues grew 10.6% and 8%, respectively, compared to quarterly growth rates of 23% and 24.1% for the online ad sector overall -- again per the IAB.

Part of the problem for newspapers has been their reliance on online “upsells” from print classified listings, which collapsed in the face of dire economic conditions and competition from online-only listing services, like Craigslist. There is little hope of print or online classifieds reviving anytime soon; the main classifieds categories -- automotive, recruitment, and real estate -- are all heavily affected by ongoing economic woes.