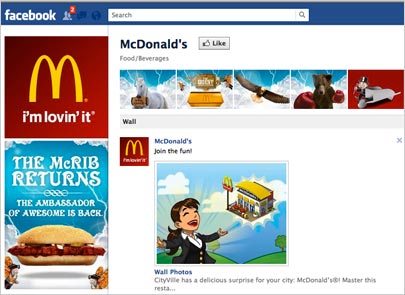 For its second year of offering its boneless pork barbecue sandwich as a national limited-time offer, McDonald’s is touting the product with a new Facebook game, “The Quest for the Golden McRib.”

The game uses integration with Google Maps to allow customers to “hunt” for one of 10 virtual golden McRibs hidden at McDonald’s restaurants around the world (meeting quirky characters along the way such as barbecue-loving unicorns, emo pilgrims and Viking accountants). People are encouraged to use the social component to share their discoveries and scores with friends and earn virtual badges for their profile pages, explains Rick Wion, McDonald’s director of social media.

“McDonald’s has used gaming as part of campaigns for a few years now and we always see lots of positive feedback and strong engagement from our customers,” Wion tells Marketing Daily in response to emailed questions. “Developing a game around a product that already instills a lot of passion seemed a natural step for us.”

The McRib has amassed an enthusiastic following as a product with a limited-time availability (like the company’s Shamrock Shake). Last year, the McRib was added to the company’s national menu for the first time since 1994, spurring a 4.8% sales increase for the month of November.

“We know that McRib fans are very passionate about their favorite sandwich and part of our strategy for developing the game was to provide them an experience that extends that love and provides more ways to share,” Wion says.

In addition to the game, McDonald’s will promote the limited-time availability of the McRib with a number of other traditional advertising, social marketing and public relations, though the company is also counting on its fans’ passions to help spread the word. “We know that fan’s love of the sandwich will also leads to lots of online conversations and our social media team will be on the spot to celebrate the love with our fans,” Wion says.