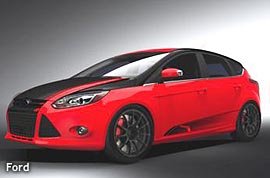 The Specialty Equipment Market Association (SEMA) show in Las Vegas, slated for early November, is kind of like the auto version of Fashion Week, but with cars and trucks instead of tall, skinny women.

Yes, SEMA is where automakers show off versions of their vehicles "dressed" by aftermarket parts designers, customizers and audio and entertainment equipment gurus who like to drink too much Red Bull and then see how many speakers, turntables and mixer boards they can shove into a subcompact car's back seat. One of the cars at SEMA will, in fact, be a Hyundai Veloster with two turntables, mixers, speakers, and even an electric guitar on the ceiling. Go figure.

While the show, like those high-end runway events, is not open to the general public, SEMA also speaks volumes about how marketers position their more prosaic vehicles to the hoi polloi. The customized vehicles at SEMA offer a look at the psychographic archetypes designers and marketers use to position different vehicles and how the people who fit those archetypes are likely to customize land accessorize their rides. And it's a big clue to the aftermarket people in attendance about what kinds of gear they might want to design for the different cars, as well.

Beyond looks, power also tends to prevail at SEMA, with cars getting lots of extra muscle to go with -- often outrageous -- looks. Here's a review at what a few automakers:

The raft of Sonics and Cruzes at the show will wear conceptual Z-Spec styling enhancements, which are being evaluated for production, per GM. The Z-Spec accessory line also happens to be available at dealerships.

Chris Perry, VP, global marketing and strategy for Chevrolet said the smaller cars are (finally) getting some of the polish that had been exclusive to Corvette and Camaro. “The Sonic and Cruze concepts demonstrate that performance comes in all shapes, sizes and displacements at Chevrolet,” he said.

Ford is also showing four versions of its Fiesta compact. Lew Echlin, Ford global car marketing manager, said some interesting things about customization in the company’s SEMA release: "One of the top three purchase reasons for the vehicle is that it fits the customer's personality. That's very rare. It's an emotional purchase, so owners want to personalize it, with a significant percentage of them even giving their car a name."

Ford will also have three customized versions of the Explorer SUV, several modified F-150 trucks, and an outrageously customized version of the F-350 Superduty called the Matchbox Superlift Brush Truck, which is emblematic of how complementary brands often get involved with the madness at SEMA.

The automaker says it will have a 28,400-square-foot exhibit with over 30 “Moparized” Chrysler Group vehicles and more than 500 Mopar accessories.

“The aftermarket is a $34 billion-a-year industry and SEMA is the perfect place to showcase everything that Mopar has to offer,” said Pietro Gorlier, president and CEO of Mopar, Chrysler Group LLC’s service parts and customer-care brand.

It also has exterior enhancements from Rhys Millen Racing, a $35,000 high-level Lexicon audio system from Harman International, and an upgraded interior in premium leather, suede, and blue stitching from Katzkin.