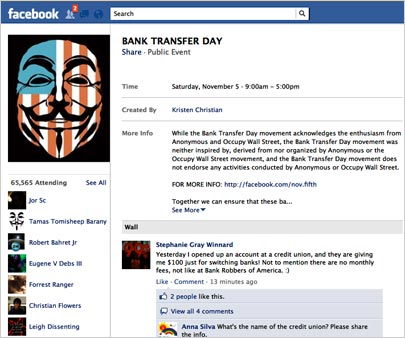 More than 66,400 consumers have indicated on Facebook that they intend to close their accounts at major banks and move their money to community banks and credit unions as part of the Nov. 5 Bank Transfer Day.

In response, the Credit Union National Association and state leagues are pushing out marketing and advertising efforts, employing an array of tools including model press releases, Q&As and management/employee “talking points” with an eye toward spiking account volume.

Spurring the backlash against big banks was an announcement by Bank of America in late September that it will begin charging customers $5 a month for using its debit card for purchases starting next year.

Brad Strothkamp, Forrester Research vice president and principal analyst, says he was surprised that Bank of America did not test the fees the way other banks have been doing. The fee will affect only the bank’s lower-end customers, who are not profitable for the bank anyway, he adds. So the result of those customers moving their accounts away from Bank of America will ultimately help the company’s bottom line and may actually be desired by the bank.

Bank of America is not stupid, he says. “They've been through this thing before. They had to know prior to doing what they did that they were going to receive an inordinate amount of backlash from consumers. I believe it was a very strategic type decision. They may backtrack a little bit on it. But let's be honest. This fee typically will not tend to hit their higher-end type customers, like private banking customers. It’s going to affect the lower end of the scale.”

The new law reduced by roughly half the amount that banks are permitted to charge merchants for debit-card transactions. Merchants have long complained that they were being charged too much to accept debit cards, which are typically used instead of cash and checks. Banks are expected to lose more than $6 billion in annual revenue as a result of the new rules, according to industry estimates.

The debit fees could also be an attempt to recover billions of dollars in revenue that will be lost from new restrictions on other fees, such as overdrafts. Most big banks have already eliminated free checking for customers who don't meet certain criteria on their accounts, such as minimum balances or direct deposit transactions.

“In response, these ‘major banks’ have decided that beginning in early 2012, any consumer with less than $20,000 in combined accounts will be charged a monthly $3-5 fee if they use their debit card at any point during the month,” according to the Bank Transfer Day’s Facebook page. “This is a blatant attack on the 99% that cannot & will not be tolerated. In a stand of solidarity, on November 5th we will transfer our money & close our accounts with these major banking institutions to take our business to credit unions (or local banks if a credit union isn't available).”

Some big U.S. banks are steering clear of imposing similar charges. Following eight months of consumer testing, J.P. Morgan Chase, for example, reportedly has decided that it will not charge customers who use their debit cards to make purchases. U.S. Bancorp, Citigroup, PNC Financial Services Group, KeyCorp and other large banks have also said in recent days that they will not impose monthly fees on debit cards.

Kristen Christian, the organizer of Bank Transfer Day, posted on its Facebook page that the announcement is "too little, too late. We're shifting our funds to the local level where they will have a more positive impact on the community."

Chase was one of the first big banks to explore monthly fees on debit cards. The bank began testing monthly fees of $3 in Wisconsin and Georgia in February. Those tests are scheduled to end in mid-November and reportedly will not be renewed or expanded.