Pennzoil Pulls Out The Piston For Ultra 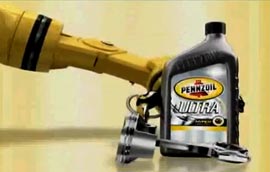 This year, Shell's Pennzoil division is spotlighting its high-end synthetic blend, Pennzoil Ultra. The company, which developed both the product and a way to test it (no small task in an industry with more testing protocols than the Tour de France) has a forked strategy: lend some glow to its whole lineup of motor oils with the premium product, but also tout Ultra as the only motor oil that doesn't just keep the inner workings of an engine clean, but also remediates buildup that's already there.

Interventional cardiology is not a bad metaphor here: You can use a proper diet to keep your clogged arteries from getting more clogged, but wouldn't it be great if you could down a pint of magic beet juice and dissolve those sclerotic blockages in, say, a week?

Robert Sutherland, principal scientist, Pennzoil engine oil technology, tells Marketing Daily that the Ultra Synthetic SKU of Pennzoil has a "Hyper Cleansing Technology" comprising a mix of detergent factors that do essentially the same thing for engines. He says the synthetic cocktail dissolves sludge that adheres to such notorious powertrain cul-de-sacs as turbocharger chambers and piston kerfs.

"[Pennzoil Ultra] differentiates by cleaning up sludge other oils have left behind, basically reversing what's happened already to the engine," he says. "Most brands say that once sludge is on you can't take it off."

The company had to develop a protocol for testing the degree to which the product could remediate a sludged engine, since such a test was not required previously. "Factory clean is the mantra; it's pie in the sky, but the goal is that the engine will never accumulate deposits. So for us, Ultra has become a tech think-tank that gives my team an opportunity to let our hair down and see how far we can push the proposition."

Pennzoil uses a piston -- albeit a spotless one -- as a brand icon for Ultra, with the tag "Nothing keeps you closer to factory clean." The company has also used racing as a platform to promote Ultra, as well as ultra-premium auto brand Ferrari, which uses Pennzoil Ultra as factory-original equipment.

Chris Hayek, Pennzoil director of global brand marketing, tells Marketing Daily that Ultra, which sits atop a five-tier lineup that includes Conventional, High Mileage, Gold Synthetic, and Platinum Synthetic, is the only oil recommended by Ferrari. "Pennzoil is about technology," he says. "Five years ago we did focus groups and found that protection [as a brand attribute] is now table stakes; consumers expect it." He said a motor oil that cleans the engine is the next technology tier that puts Pennzoil ahead of the curve, at least for now.

Hayek says that as the message isn't a simple one, a big part of the marketing of the product involves photographing cross-sections of pistons demonstrating the different degrees of engine cleaning achieved by Pennzoil's different grades. "They can see that this is what 10% looks like; this is what 40% looks like," he says.

The company is also talking about how Penske Racing runs off-the-shelf Pennzoil Ultra in its cars. "The other part of the equation is that Pennzoil Ultra is the only one of two [motor oil products] approved for IndyCar," he says. Honda, which provides the official engine of IndyCar, chooses which motor oil goes in race engines.

Pennzoil will go to market with a directly competitive campaign set to launch Nov. 7. "Ultra is our flagship, and it's a halo," says Hayek, adding that the forthcoming effort will take on the top synthetic brands, including the category leader Mobil.