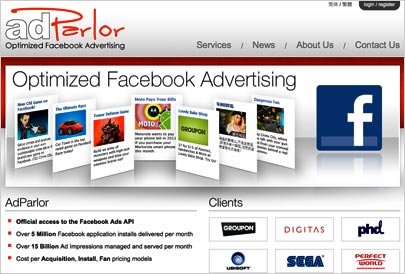 AdParlor, which built its business on Facebook by offering advertising tools to social game developers, has since expanded to provide ad services to a broader range of marketers and agencies. The company provides a system that allows developers and brands to target ads and manage bids for large-scale campaigns.

Through its full-service offering alone, Toronto-based AdParlor says it manages more than 1 billion ad impressions a day on Facebook. Adknowledge CEO Scott Lynn said the acquisition will help the company strengthen its ability to provide ad opportunism on Facebook. “The fit with Adknowledge is to integrate ad inventory from the right-hand column into our general advertising marketplace and make the long tail more accessible for all types of advertisers online,” he said.

Under the deal, AdParlor will continue to operate in Toronto as an independent unit within Adknowledge and all of its approximately 20 employees will join the company.

AdParlor co-founder and CEO Hussein Fazal, who will keep that title post-merger, said the deal would help the company accelerate its growth.

“The big growth areas over the next five years are going to be with brands and agencies. "We need a physical presence in places like London, New York City and Chicago, and this merger will help us get into those markets and capture all those new budgets,” Fazal said.

AdParlor scored a coup in March when Groupon tapped the firm to handle the daily deals site’s entire Facebook ad spend, representing millions of dollars, exclusively. Other clients include Ubisoft and Sega and agencies such as OMD and Digitas.

Lynn said AdParlor’s Pulse system will be integrated into its own ad marketplace in the next three to five months. He added the company will continue to pursue strategic deals where it can find "new pockets of inventory" for long-tail advertising.