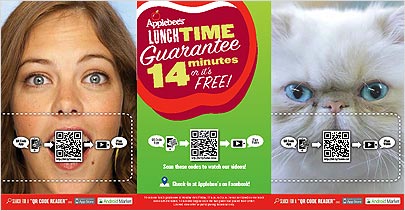 What is a business person to do when she is sitting in a restaurant booth waiting for her lunch order... after checking email, Facebook and a weather app on her smartphone, that is? Well, there's a good chance there will be a tent card on her table with a QR code superimposed on a cat's mouth. Might as well snap that and see where it leads. And the payoff is a full screen video of a talking cat mouth you can fit over the tent card or your own mouth to kill those 14 minutes or less in which the chain restaurant guarantees delivery on select items. At 89 Applebee's restaurants, owned by franchisee Thomas and King, that simple use case has already driven more than 62,000 activations since a set of QR-encoded table tents appeared in July.

"It is very impressive," says Christy Metcalf, senior vice president-marketing at Thomas and King, the third largest franchisee for Applebee's, noting, "QR codes have not gained a lot of traction."

She and Lexington, Kentucky-based marketing agency Cornett had surveyed the market and found Kellogg's crowing about having gotten 40,000 scans off of ubiquitous Crunchy Nut Cereal boxes. In contrast, "we had 89 locations and got over 30,000 scans [the first month]."

"Everyone is asking what should we do with QR codes. I don't think we have had a single client who hasn't asked about it."

But exactly what to do with a code didn't really dawn on his creative team until they started observing themselves sitting at a restaurant waiting for lunch one day.

"Everyone pulls their phone out. So we thought that since there are so many pieces of material already on the table why not make them interactive and add a level of entertainment."

Apparently now they have thousands of people in restaurants snapping QR codes and holding TableCat animations over their mouths to entertain one another during the wait.

Metcalf agrees that putting a QR code in a cat's mouth played into multiple reflexes generated by the digital world - from curiosity about what that code is doing there to the viral video and image trope of funny cat media.

"You pull up the video and it is just the cat mouth talking to you," she says. And like a clever cat video online it is begging to be shared, which the program lets you do. People are showing off the trick to the uninitiated and even taking pictures of themselves playing TableCat at lunch.

"You can share menu items, invite guests and help them find the location," she says. The marketing goal was both to engage the consumer and use them to spread the word about the 14-minute menu items at the restaurant.

The restaurant campaign already had a light tone, with TV spots featuring singing dancing cubicle dwellers crooning the Applebee's jingle about a 14- minute menu. The mobile piece extended the theme and tone of the overall promotion.

When it comes to using 2D codes, "It doesn't always have to be about a discount," says Coomer. "It can be entertainment, and that is where we really went. It was a fun campaign, a fun commercial, a lighthearted feel. So we felt like delivering another level of entertainment."

The three-sided table tent had two other QR code opportunities, including a link to run the popular video commercial around the Thomas and King 14-minute service guarantee program. But it is the character now known as TableCat that has become the big hit, attracting by far the highest use and generating over 33,000 YouTube video views. The character has even spun off now into other viral videos like comic reviews of the iPhone 4S and Facebook's timeline feature.

Coomer says he sees so many 2D mobile codes plastered everywhere, but they ask people to engage at unlikely moments in their day. "This is all about that captive audience. When you get a consumer to stop in their tracks and they are bored, you have the opportunity to engage them."