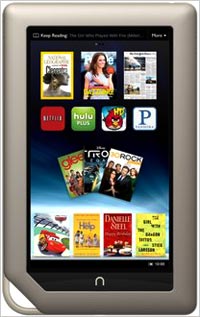 Gearing up to take on the iPad and Kindle Fire, Barnes & Noble on Monday unveiled its own tablet computer equipped with a faster, dual-core processor and double the storage and memory of the Nook Color. The extra firepower will help the 7-inch Nook Tablet power high-definition streaming video along with providing access to 2.5 million digital books, magazines and newspapers.

Launched at an event in New York, the Nook Tablet pits Barnes & Noble more directly against Apple's iPad and Amazon’s forthcoming Kindle Fire, set to go on sale next week. Priced at $249, the Nook Tablet is $50 more than the 7-inch Kindle Fire, but still half the cost of the 10-inch iPad.

The Nook Tablet, which closely resembles the Nook Color, will hit stores around November 17, just days after the Kindle Fire. Barnes & Noble CEO William Lynch focused particularly on the head-to-head competition with the Amazon device during his presentation. For example, he noted that the Nook Tablet's 1 GB of RAM and 16 GB internal storage is twice that of the Fire, as well as providing a superior display via its VividView technology.

The device will come pre-loaded with Netflix and Hulu Plus, highlighting Barnes & Noble's confidence in the Nook Tablet's ability to stream (at 720p) and store movies and TV shows. For its part, Amazon has stressed cloud storage for the Kindle Fire.

"Content will look and render better on the Nook Tablet than the Kindle Fire," said Lynch. He also emphasized that unlike Amazon, consumers can get in-person support for the Nook at Barnes & Noble's 700 stores nationwide from 40,000 trained staffers.

The Wall Street Journal recently reported that Barnes & Noble will double the size of its Nook boutiques in 40 of its top stores nationwide to 2000 square feet in time for the holiday shopping season. On Monday, the company showed off the new larger Nook shop at its flagship Union Square store in New York.

Along with the new Android-based tablet, Barnes & Noble introduced an updated Nook Color, reduced in price from $249 to $199, matching the Kindle Fire. The upgraded device includes access to new content including Hulu Plus, music services like Rhapsody, Grooveshark and Pandora and apps such as Scrabble.

Similarly, the price of the black-and-white Nook Simple Touch Reader was dropped from $139 to $99. The upgraded Nook Touch offers faster page-turning, longer battery life and an improved display. Amazon has lowered the price of its entry-level Kindle to $79.

As of the second quarter of 2011, Amazon's Kindle line leads the worldwide e-reader market with a 51.7% share, followed by the Nook brand at 21.2%, according to IDC data issued in September. During his talk, Lynch put the company’s share of the e-reader market at 27%, and said the Nook sales will generate $1.8 billion this year, although the business is still unprofitable.

Overall media tablet sales worldwide are on pace to reach 63.6 million units -- up 261% from 17.6 million units last year, according to a Gartner forecast in September. The iPad is expected to account for three-quarters of those sales.