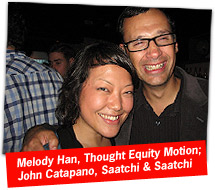 I went to Thought Equity Motion’s 2nd Annual Ping Pong Show Down at SPiN NYC the other week. This write-up has been in the works for a while, but I hurt my back and spent the past few days whining and staying in bed (send flowers, please). 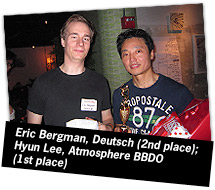 I arrived almost on time, but apparently not soon enough -- because someone told me that I had just missed SPiN’s celebrity founder, Susan Sarandon. She was chatting with patrons at the bar and skipped out shortly before I arrived. Probably for the best, because you guys know that I get kind of obnoxious around celebs. If they do anything that’s outside of how I think they should act, (in this case, Sarandon should be like her character in “Thelma & Louise”) then I rag on them in this column. But rich and famous people should be held to a different standard. In my mind at least.

I’d never been to SPiN before. It’s a really cool space. There is a large room full of ping-pong tables with a few guys running around with nets on sticks picking up run away balls. A Sisyphean task if I ever saw one. Th 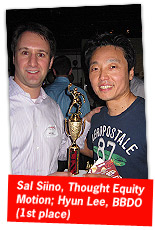 ere was a nice selection of wine and craft beers, but I was too busy wacking balls at my plus-one’s head to get my drink on. Cocktail waitresses in all black maneuvered through all the commotion to pass around delicious snacks including mini lobster rolls. I die! I was going in to grab the last lobster roll on a plate when some man came up and snatched it. My mouth dropped, my eyes squinted. He tried to apologize and tell me to take it -- to which I replied, “Ew! Your hands have been all over it. I don’t care. Whatever.” Maturity isn’t my strong suit.

Before I knew it, Showdown time had started. I don’t know how ping-pong tournaments work in terms of games and whatnot -- is it like tennis? -- but I do know that there was some intense competition happening. In the end, Hyun Lee of BBDO was crowned the champion of the evening, while Eric Bergman of Deutsch took home 2nd place honors. This party reporter was shocked that media geeks were so into ping-pong. These guys were really taking it seriously. 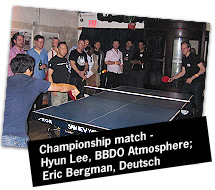 ommunications manager, Abby Lurie, later told me that they had over 120 guests at the showdown from Ogilvy, Ammirati, BBDO, Mcgarrybowen, MRM, Grey, Y&R, Publicis, Momentum, and Digitas, among others.

Momentum, Jason Culbertson with MRM, and Jon Neckes and Mark Book from Digitas.

Thanks to Thought Equity Motion for pictures. As always, if you want me to be sassy and write about your party, email carrie@mediapost.com. Also, I just got back into Twitter and am feeling like a loser because I don’t have many followers. Boost my self-esteem! Follow me @carriecummings. Thanks!