From Bieberlicious To Bleak, Bracing For Black Friday 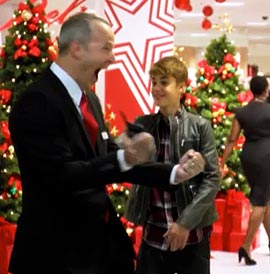 From launching Bieber-fever advertising to fending off media campaigns from overworked store associates, retailers are gearing up for what looks to be a bruising Black Friday.

Macy’s is breaking its humorous Justin Bieber TV spot Tuesday night, urging shoppers to get an early start, and alerting them to the chain’s Black Friday specials, which for the first time this year start at midnight. (It will also take over YouTube’s homepage.) Meanwhile, Best Buy, also opening at midnight for the first time, is fending off employees who have launched a “Take Back Thanksgiving” campaign, similar to one aimed earlier at Target. And Walmart has just unwrapped a free-shipping offer on all its electronics.

And experts expect to see more, and deeper, promotions and discounts as the week wears on, as polling shows consumers are a little less jazzed about Black Friday than stores would hope. While the National Retail Federation is forecasting that 152 million people will shop on Black Friday weekend, and that the number of people who say they will definitely shop rose to 33%, from 27% at this time last year, other estimates are less promising.

As a result, expect slashed prices, with 78% of the CMOs expecting more discounts and promotions overall this holiday season. Last year, only 64% of the CMOs felt that way.

“Black Friday is not disappearing, but deal-fatigued shoppers have been there and done that,” says Ted Vaughan, partner in the retail and consumer product practice at BDO, in the company’s release of the results. “With new promotional strategies and earlier discounting, retailers are looking to create more spending triggers to get an edge and keep inventory moving throughout the season.”

Even if consumers don’t shop that weekend, the NRF survey found plenty of evidence about intensified bargain hunting among shoppers, with 23.1% seeking coupons on sites like RetailMeNot.com and FatWallet.com, and 32.3% tracking email coupons they receive from retailers.

Social media is also playing a much bigger role, with 17.3% saying they intend to monitor deals via Facebook pages, and 11.3% checking in with such group buying sites as Groupon and LivingSocial.