Mag Bag: 'Playboy' Is Most "Liked" Mag On Facebook 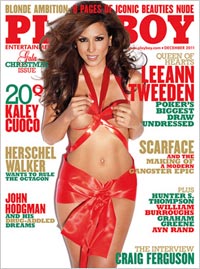 Playboy is head and shoulders above other magazines when it comes to Facebook “likes," according to the latest data from MagazineRadar, which found 5,582,512 “likes” for the venerable cheesecake purveyor, compared to just 1,770,491 “likes” for Vogue and 1,345,104 for People.

These disparities are especially interesting considering that Vogue and People have audiences several times larger than Playboy. According to the latest audience figures from GfK MRI, in mid-2011 People had 42.9 million readers and Vogue had 11.5 million, versus 6.11 million for Playboy.

What's more, these consumers visited an average of three different magazine social platforms per month. Of 170 magazines tracked by Affinity's AMS, 23 are attracting over one million visitors per month through their combined social media platforms, including Facebook, Twitter, and other social media destinations.

Jason Wagenheim is stepping down as publisher of Glamour after less than three months on the job, but will continue to work at Conde Nast in another capacity, according to the company. He is being replaced by Bill Wackermann, who previously served as publisher of the title from 2004 until September of this year, when he was promoted to executive vice president and publishing director with responsibility for Glamour, Brides, W, Details and Bon Appetit. The latest move returns him to direct oversight of Glamour, although he still retains oversight of Bon Appetit, Details and W.

Marc Peyser has been promoted from former deputy editor for Budget Travel to editor of the publication. News of his promotion comes close on the heels of the magazine winning the Society of American Travel Writers’ Lowell Thomas Award for Best Travel Magazine. Peyser left his longtime position as senior culture editor in Newsweek for Budget Travel in February, following Newsweek’s rocky, high-profile merger with The Daily Beast.