A Radio Station Devoted To Songs Used In Ads? What's the Frequency, Kenneth?

I have a thing for music used in TV commercials. It’s borderline obsessive. A decent chunk of my downloaded music collection comes from songs I heard first in TV ads.

Take this Nike spot from 2008, for example. The ad itself is topnotch -- along with the song playing throughout -- “List of Demands” by Saul Williams, which still has a home on my running iPod, used heavily on speedwork days.

And nowadays, can anyone listen to “The Choice is Yours” by Black Sheep and not think of Kia Soul and its rapping hamsters?

"TV Commercials Radio" plays roughly 175 songs and gets updated weekly, depending on the time of the year. 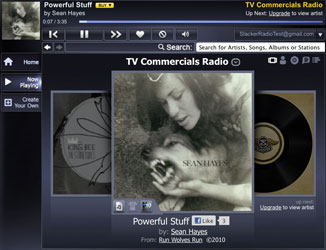 The station’s busiest time, according to Mat Bates, senior radio program manager at Slacker and programmer of TV Commercials Radio, is now, during the holiday season and around the Super Bowl. Bates also mentioned that car and liquor ads are the best song sources.

Don’t be surprised to hear "Days Go By" from Dirty Vegas, used in an ad for Mitsubishi, or “Hello" by Martin Solveig, found in an ad for Trident Vitality.

It’s fun to listen to the music and try to figure out where the song was initially used. Many songs were unfamiliar to me, and then the tune “Powerful Stuff” by Sean Hayes started playing and I immediately recognized it from an ongoing Subaru ad.

My only wish is that the playlist also included what commercial the song appeared in, saving me the extra step of Googling the answer.

“Music supervisors are a much more reliable source for new music discovery than commercial radio or any other traditional media outlet,” said Bates. “A well-placed commercial sync is more valuable to an artist in terms of exposure and engagement than heavy rotation on a terrestrial radio station. The idea behind this station is to showcase the work of those music supervisors and to help Slacker listeners engage with music that might have otherwise gone unidentified.”

Some other favorite guilty pleasure songs I found in TV ads are: “It’s Love” by Chris Knox for Heineken Premium Light Beer; "Falling in Love at a Coffee Shop" by Landon Pigg, used first by DeBeers and then AT&T; and my personal favorite, Discovery Channel’s promo for Shark Week, using Lady Gaga’s song, “Teeth.”

Do you have any favorite songs you first discovered, courtesy of a TV ad?