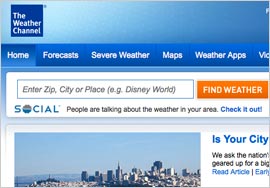 In a signal that iPad design might serve as an inspiration for a Web presence, the Weather Channel has launched a new desktop app based on the recent new look of its iPad iteration. The network said that all mobile apps it uses now will use the desktop interface.

The new desktop app is for Windows, while a Mac version is on tap.

New versioning includes a lifestyle feature offering insight into how weather impacts pollen levels and flu forecasts, a bolstered video offering and interactive maps that display more information in areas such as UV index and rainfall.

Infiniti has signed as the exclusive launch sponsor. The Weather Channel says its current app has 13 million-plus unique users a month.

The Weather Channel has been busy in the app sphere, launching one for the Kindle Fire and one for Android mobile devices. Both have a social media platform, where users can access real-time tweets about their local weather.

The refashioned iPad app was launched in October with Westin as the sponsor and offering 3D capabilities.