A Brief History Of Laura Lang's Move To Time 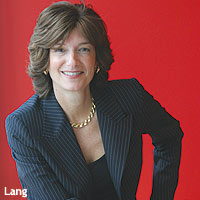 Sometimes big media moves are sudden and completely serendipitous. That was the case with Laura Lang’s decision to step down as Publicis’ top digital executive, and CEO of its Digitas group, to become CEO of Time Warner’s Time Inc. Lang describes it as a “random thing” that happened, and progressed rapidly over the past few weeks. It began, she said with an obligatory call from a recruiter, and Lang’s decision to take the meeting with Time Warner management more out of curiosity than a desire to change her career path.

“I did not go looking for this. I’ve been really happy where I am,” she tells Online Media Daily, adding, “I took the meeting, and I ended up really connecting with this opportunity. These are great brands, and great titles, and the thought of being able to be a part of the transformation of another part of the industry was really appealing to me."

Most appealing of all, Lang says, was the appeal of the editorial product and brand of Time Inc. magazines like Time, Fortune, Sports Illustrated, People and Money, which she described as, “amazing.”

“Great content matters,” she says. Lang should know, because much of her focus running Digitas ever since she succeeded former chief David Kenny has been on finding new ways of developing great content on behalf of the agency’s clients and their brands. She did that initially by spawning Digitas’ annual “New Front,” and event that gathers leading Hollywood creators, performers, producers and packagers, as well as digital technologists each year in New York to brainstorm ideas for projects that could lead to breakthrough content integrations. One of the ideas that germinated from those meetings was Digitas’ award-winning “Real Women of Philadelphia” campaign for Kraft, which many consider a poster child for content and brand integrations.

Lang says it’s too early to discuss her strategic plan for Time Inc., and to what extent brand integration, or her expertise in digital marketing services, might play in reshaping the organization, but it is clear that she brings that unique perspective into the world’s biggest magazine publisher at a time when magazines, like all other traditional media, are seeking to become both more digital and better integrated with the brands that underwrite their existence.

As for Digitas’ brand, Lang says she’s leaving it in good hands, even if it’s still too soon to say exactly who it will be dealt to. She admitted that the suddenness of her acceptance of the Time Inc. job meant that there was no succession plan in place for the Publicis organization, and that Wednesday’s announcement sent it scrambling.

On the plus side, she says the organization has an amazing bench, including Digitas North America CEO Colin Kinsella, Razorfish Global CEO Bob Lord, and Digitas International President Stephan Beringer. While she doesn’t explicitly say so, they are all deemed candidates to succeed her as CEO of the group, and Publicis’ top digital executive, as insiders note that Publicis historically promotes from within, and generally does not recruit top candidates from the outside. In fact, some believe had she stuck around, Lang might have eventually been seen as a candidate to succeed Publicis CEO Maurice Levy, as her predecessor David Kenny once was his leading heir apparent before leaving to run Akamai (Kenny has since stepped down from Akamai, and is on the board of Yahoo).

Meanwhile, Lang will fill a big void at Time Inc., which has been operating without a CEO for nearly a year since former CEO Jack Griffin was ousted. Griffin, who joined Time Inc. in August 2010 from Meredith Corp., succeeded long-time Time Inc. CEO Ann Moore.