Behind The Forecast: Q&A With Rookie Ad Seer Vincent Letang 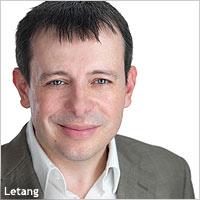 On the eve of his first appearance at UBS’ annual media week conference in New York, Magna Global Executive Vice President-Director of Global Forecasting Vincent Létang spoke to MediaDailyNews about the macro and micro factors influencing the ad economy, how the business is changing, and the “half-life” of ad forecasting gurus.

MediaDailyNews: What are the macro and micro trends influencing your new forecast?

Vincent Létang: First of all, the economy is no mystery. We are seeing the same numbers as everyone else. The expectations for 2012 have dropped down gradually over the last few months. The IMF, in September, said the global economic growth in 2012 would be 4%, which was half a point lower than the previous expectation, and very recently, they said it would be “three to four percent,” and that the biggest industrial countries would have only 1% and the Eurozone would basically have only zero. So we know there will be no growth in Europe, there will be little growth in the U.S., and that’s the economic background everybody knows about.

Another thing to take into account, in 2012 is the quadrennial effect. The big sporting events that happen every four years – the Olympic Games, and the European soccer tournaments – and of course, the U.S. elections. We know this will generate incremental ad spend, mostly to TV, and outdoor, and a little bit in newspapers. We expect that the quadrennial effect in the U.S. to be substantial and to be generating $3 billion on top of what the ad spend would be in a normalized year.

MDN: Has the quadrennial effect been impacted by those macro-economic factors in any way?

Létang: No. We believe this is something that is pretty much immune from the macro-economic environment, because if you are a politician you have to spend. You cannot postpone. In the U.S., we believe this will be bigger than ever, because there has been a relaxation of the rules governing how much money can be raised and how it can be spent. And there will be a lot of swing states and a bigger battle. For the sports events, the sponsors who want to be associated with these big events cannot postpone it. So we think the quadrennial effect will be immune from trade-offs in the macro-economic environment.

MDN: So the quadrennial effect will be a bigger contribute to overall advertising spending than normal?

Létang: Yes. Depending on how you look at it, it is bringing one to two points of extra growth. And we think we will be closer to two [percentage points] this time.

MDN: What about the micro-economic factors. You may be seen that your old Interpublic colleague [Pivotal Research’s] Brian Wieser just came out with a research note pointing out that there are no new categories creating advertising stimuli. Do you see any new categories emerging that could be a stimulus on the horizon?

Létang: There is one that is new and is still growing – the online category. The Internet giants are starting to invest in traditional media, which is paradoxical in a way. We see the Internet giants promoting their search engines and their other products on TV, and on billboards, and so on. It’s not entirely new, but it’s growing. And there is also direct response from online price comparison engines. It’s become quite big, very quickly, and is growing fast in the U.S. and the U.K.

MDN: And they are spending money on traditional media to generate awareness?

MDN: Do you see any other categories stimulating the advertising economy on the horizon?

Létang: Another factor for 2012 is what I call the BRIC engine, the fact that Brazil, Russia, India and China have been growing very strongly – meaning their advertising economy is growing faster than their overall economy – which is already growing at a fast pace. That’s not new. What’s new is that they are sort of reaching a critical mass scale that allows them to offset some of the sluggishness of the Western World.

MDN: Are those markets beginning to have much impact as multinationals? Are they beginning to stimulate other markets by exporting and marketing outside their own market? For instance, Chinese computer marketer Lenovo has been spending a lot in the U.S. recently?

Létang: That’s a good question, and the answer is yes, we starting to see companies from India and China taking footsteps in the Western World. Lenovo is a good example, but it’s also happening in the media category. There are at least two big Chinese Internet companies that are looking to expand abroad.

Going back to the BRIC nations, I believe that there is still a lot of potential, because if you look at the size of the advertising market there per capita, it has a lot of room to grow. Globally, the average is $80 per year per capita. That is what is spend annually on advertising per capita on the planet. Russia is at $70. Brazil is at $60. China is at $21. And India is at $4. There is a lot of catch-up to do, and as the middle class is rising in those countries, and they are moving toward Western style consumption, it is really a crucial moment for any brand, be it a local brand, or a Western brand, to invest, to communicate, and to get the top-of-mind of those people.

MDN: Interpublic has some very rigorous models for estimating and forecasting ad spending. Do you think there is a lot of growth and stimulus going on out there that you’re not accounting for because your models are so stringent? Things like social media, or things that are so below-the-line that don’t fall into your categories, but which are expanding very rapidly?

Létang: We do capture some of the social media, as long as it is bought media. What we don’t capture is earned media and things that are part of the social conversation. And I don’t see how we could, because it’s just electronic word-of-mouth.

MDN: You will unveil your first public forecast at the UBS conference on Monday, which is kind of like your coming out party. How are you enjoying the job so far?

Létang: I am enjoying it. It’s a little new for me, because before I was analyzing the advertising industry from the outside. What’s different now is that I am able to speak to a lot of people who are practitioners, and can give me hard facts, concrete evidence about how business is conducted. And those people were a little bit more difficult for me to reach previously. It is always interesting when you cross the line and go on the other side.

MDN: Has anyone called you a guru yet?

Létang: Well, I have been doing this for a while. I was pretty much doing the same thing in London for six years, so for me, this is pretty much a continuation of something I’ve been doing for ten years and I intend to continue doing it for a long time.