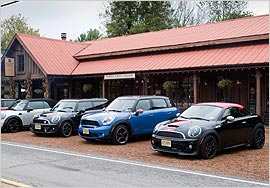 And overall consumer satisfaction with the new-vehicle sales process has improved versus last year, per the survey-based study, whose raw data was garnered from responses from 24,045 buyers who purchased or leased their new vehicle in May this year.

The study, fielded between August and October, is something of an auscultation around specific areas of consumer gut reaction to the oft-dreaded dealership experience: working out the deal; salesperson; delivery process; and dealership facility. The study also measures satisfaction with brands and dealerships that were, to misappropriate the Psalmist, "The stone the builders refused." Among these rejected brands, the firm polled satisfaction across five measures (listed in order of importance): salesperson; fairness of price; facility; inventory; and experience negotiating.

Overall sales satisfaction averaged 648 on a 1,000-point scale in 2011, improving by 13 points from an average of 635 from 2010. The firm says that the gain suggests that, as market conditions improve, automotive manufacturers and dealers are placing renewed focus on and investment in providing buyers with satisfying retail experiences.

Jim Gaz, director of automotive research at J.D. Power and Associates, tells Marketing Daily that automakers are smart to focus on retail." What we have seen is that 60% of respondents know exactly what vehicle they want to purchase, but that said they still shop an average of 2.6 brands when they are looking," he says. "And while they are still shopping multiple brands, they are visiting an average of 3.5 dealerships to ultimately buy that vehicle."

He says that the treatment consumers received was the number one reason for choosing to purchase a vehicle at a given dealership, with 59% of respondents saying how they were treated drove their decision. Next, he says, was location and price. "Similarly, when we look at most influential reasons for rejection, dealer treatment is one of the top three reasons," he says.

Cadillac and Mercedes-Benz followed Lexus in leading luxury-brand segment sales satisfaction rankings. Porsche and Land Rover round out the top five. Below the segment median of 688 out of 1,000, were Lincoln, BMW, Infiniti, Audi, Acura and, in last place, Volvo. The most improved luxury brands were Lincoln, which moved from 9th place to 6th, and Audi moving from 11th to 9th.

Mini wins for the second year In the mass-market segment, followed by Buick and GMC. Next are Volkswagen, Chevrolet, Scion, Subaru, Mazda, Chrysler, Ford and Toyota. Lagging the 642-point median are Honda, Nissan, Mitsubishi, Hyundai, Dodge, Kia, Ram and Jeep.

Gaz says Hyundai's problem is good to have right now. "They are on fire. They have a hot product line, so there may be inventory constraints limiting their ability to get customers into vehicles they want."

The study said that, as in-vehicle technology is getting more and more complicated, the value of dealership salespeople in explaining how to work various features can't be underestimated. The firm's Initial Quality Study (IQS) study found that rates of owner-reported problems around audio/entertainment/navigation technology systems have increased steadily between 2009 and 2011, and that some of those problems may stem from users not understanding how to operate features.

"In our IQS results we released earlier we saw an increase in problems associated with technology," says Gaz. "What we see in our sales satisfaction study is that when a dealership takes time to explain features and functionality, satisfaction improves, customers’ likelihood to recommend that dealership improves, and customer likelihood to return to that service department also improves. So we see a linkage between explanation and customers' positive reaction."