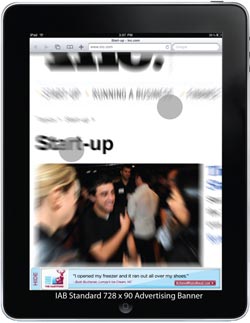 One of the early leaders in rich media ad technology, Crisp Media has acquired Smart Device Media, a startup that has created a marketplace for premium mobile ad inventory. The principals did not disclose the purchase price, but the combined companies will retain the Crisp Media name, while installing Smart Device founder Jason Young as CEO.

The two companies hope to offer brands and agencies a one-stop shop for both ad creation and tech services, as well as premium placement.

Longtime Crisp chief executive Boris Fridman will remain as a board member.

Crisp has developed an HTML5 ad technology platform that has been helping major brands execute and measure rich media campaigns across other ad networks for mobile apps and Web. With this acquisition, however, Crisp adds its own premium ad network business.

Under former Ziff Davis CEO Young, Smart Device Media had already created a marketplace of inventory from high-profile tech brands, like Ziff Davis properties, IGN and UGO. According to Fridman, Crisp had been moving in this direction with its Crisp Select program, which began the process of identifying and aggregating premium publishers.

“One difficulty for marketers has been buying quality inventory at scale,” Fridman says. “A lot of the existing ad networks have inventory I would not classify as brand safe, exactly.”

In acquiring Smart Media Devices, Crisp gets a sales staff and a portfolio of publisher partners, especially in the tech vertical. By bringing the technology and the inventory together under one roof, he is hoping to accelerate brand adoption of mobile by giving them high -impact ad units served on equally high impact environments.

Young says his company was also moving to the same point, but from a different direction. Smart Media Devices launched ad channels earlier this year to “address the needs of premium brand marketers coming into mobile to buy targeted, high-quality placements at scale and the needs of premium publishers to monetize unsold portions of their inventory, consistent with how they sold it themselves.”

Increasingly, Young found that brands needed more than inventory -- they also needed to know how to build, serve and measure their ad units.

Although Young’s sales force will be selling inventory, and already has 200 publishing brands in the network, Fridman says the Crisp Engage ad-tech platform remains an open platform that will serve across networks. “It is a vibrant part of the solution mix,” he says. “We continue to be network-agnostic. If an agency wants a campaign on Weather.com or JumpTap or others, they can do so."

Crisp has done work with Audi, Capitol One, Hitachi and American Express, among others.

Online advertising networks have also claimed to specialize in premium ad inventory for the last decade, and yet many regard the Web’s ad technology ecosystem as a race to the bottom, in terms of low pricing amid oceans of inventory sold mainly on a performance basis. Young and Fridman argue that mobile is at an inflection point where digital advertising has the opportunity to take a different path. “Many publishers, I hope, learned lessons from the mistakes on the desktop Web,” says Young.

“There is the realization that mobile is different,” adds Fridman. “On the Web, publishers could segregate inventory and in mobile you cannot easily do it. Selling through inventory liquidators doesn’t make sense to them. They are beginning to take control of it and make sensible channel strategies that will deliver brand advertising at high CPMs, combined with technology that attracts marketers.”

The Crisp acquisition of Smart Devices Media is the latest in a wave of consolidation in the mobile space. Mobile marketing services company Augme acquired Hipcricket this summer.  Another full-service agency, Velti, acquired MIG last month, but only after MIG itself bought up smaller mobile companies.