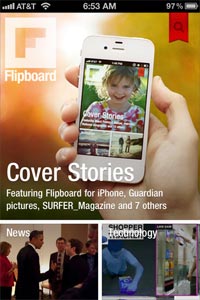 One of the great success stories of iPad publishing and news aggregation on the iPad finally made its way to the iPhone with the release of a new Flipboard app. The “social magazine” turns news links from the social network streams into nicely formatted and illustrated pages that flip like paper counterparts.

The iPhone version can tap into the Flipboard user’s account; the iPhone version miniaturizes the same subscriptions as their iPad edition. For the smartphone, however, the company added a “Cover Stories” feature. This presents the latest -- and what Flipboard believes are the most interesting -- stories for the user, based on his or her interactions with the app.

Flipboard for iPhone uses the same page-flipping design metaphor as its larger cousin, but in this case, pages flip from bottom to top rather than from side to side. The app leverages the news items from your Facebook, Twitter, LinkedIn, Tumblr, Stagram, Google Reader, Flickr and 500px connections, but also offers channels created in partnership with branded media sources, such as USA Today, Rolling Stone and Conde Nast’s major magazine titles.

The app is free on the iPhone, as it is on the iPad -- although on the larger platform, Flipboard is already monetizing the app with full-page ad interstitials it sells into the branded media channels. That model is not yet evident in the iPhone version of the media channels.

A Flipboard spokesperson tells Online Media Daily: “We launched Flipboard for iPhone without advertising. Over time, you will start to see ads as we work with our publishing partners and advertisers.” The ad units on the iPhone will follow similar formats to those on the iPad version. “We’re very much inspired by print when it comes to content, as well as advertising. The iPad has created a great opportunity for full-page, print-like brand advertising,” according to the company.

Like its iPad counterpart, the iPhone Flipboard has a content guide that features both branded media and other vertical content channels. A search bar can search for news items mentioned across the social networks. Sharing tools allow for posting an items on one’s social network, retweeting, or saving in Instapaper or Read It Later.

Flipboard has been a consistently popular app on the iPad since its release. The company has attracted more than $60 million in funding and partnerships with various media companies. But the market for formatted aggregated news for touch platforms has also attracted competitors. AOL released its Editions app in recent months, as did Yahoo and its Livestand. CNN recently acquired Zite, and rivals such as Pulse are also popular among users.