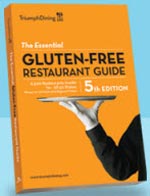 Restaurant operators are recognizing and responding to the growing numbers of Americans who require gluten-free or other controlled diets.

Menu items billed as gluten-free increased by 61% between 2010 and 2011, reflecting greater demand both by consumers with gluten allergies or intolerance and those who just consider gluten-free foods to be healthier, according to a new report on consumer and industry trends related to restrictive diets from food service consultancy Technomic.

Restaurants are also rolling out more cholesterol-free, sugar-free and low-fat offerings, and providing more information on their menus about ingredients to make it easier for customers to see which items include certain food allergens or are lower in fat or sugar.

Nearly three-quarters (73%) of consumers want restaurants to provide clear information about their food’s fat, sodium and sugar content, and potential food allergens, and women feel even more strongly about this than men, according to Technomic’s consumer research.

However, sodium remains a challenge for restaurants, as well as food CPG makers. Although straightforward mentions of "salt" have increased dramatically on menus, menu items described as "low-salt" or "low-sodium" have been virtually stagnant -- and remain very low in number.

Other findings from Technomic’s consumer research: