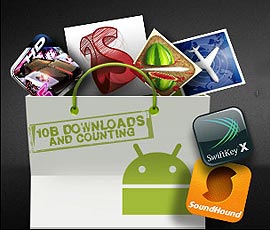 Despite the generational divide often underscored by technology, new data from Nielsen shows that Android phone users of different age groups have remarkably similar tastes when it comes to mobile apps. In particular, the affinity for Facebook and various Google apps cuts across users ages 18 to 44. A notable absence among the top 15 apps, however, was Google’s Facebook rival, Google+.

For the study, Nielsen divided consumers into three age segments: 18-24, 25-34, and 35-44. The apps for Android Market and Facebook were No. 1 and No. 2 across each, and Gmail, Google Maps and Google Search rounded out the top five across the board.

The active reach (the percentage of Android owners who used an app in the last 30 days) was at least seven in 10 for each app, with roughly eight in 10 for Facebook. The sixth-ranked app spanning each age category was another Google property: YouTube. The video hub does skew somewhat younger, with nearly two-thirds of 18- to 24-year-olds using the app compared to half (51%) of those ages 35-44.

Among the rest of the most popular apps are familiar names, including “Angry Birds,” “Words With Friends,” “Pandora” and “Adobe Reader.” But “Angry Birds” these days holds more appeal for older users, with 35% active reach among those 35-44, compared to 22% active people 18-24.

It may be that older users tend to be longtime Amazon.com shoppers and more comfortable using its app storefront. Even so, Amazon Appstore still has a long way to go to catch up to the average of roughly 90% active reach that Android Market commands across the age range studied.

Younger users are more likely to listen to online radio, with 30% in the 18-24-age bracket using Pandora versus 20% of those 35-44. Groupon only made the extended list of top 20 apps among the middle-age group of 25- to 34-year-olds. Google+ also managed to reach the top 20, with active reach higher for those 25 and over compared to the college-age crowd.

The last time Nielsen published Android app data, in September, it spotlighted preferences based on gender. It found that Facebook’s reach was much higher among women (81%) than men (67%). Women were also a bit more likely to use Twitter.