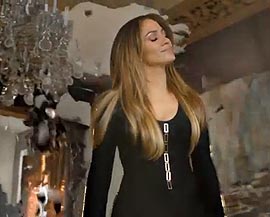 When promoting a product that claims to have “Beautiful Sound,” it pays to have a spokesperson who can speak to both qualities in one shot.

Harman International Industries has enlisted actress/model/pop star/“American Idol” judge Jennifer Lopez to star in a new campaign for the company’s Harman Kardon brand. Lopez, who is set to appear in her second season as a judge on “American Idol,” has already begun appearing in a television commercial that is premiering in Europe and online.

“She really boldly signifies beauty and great sound,” Chris Dragon, senior director of global brand marketing for Harman International, tells Marketing Daily. “She has a real appreciation for music and everything that goes into it.”

The commercial, directed by Martin Campbell (who directed the James Bond reboot, “Casino Royale”), shows Lopez in a drab apartment. She sets up one of Harman Kardon’s products (a BDS audio/video home entertainment system) which, when turned on, begins to shake away the drab surroundings and antique furnishings to reveal a sleek, modern setup. “You can complement a beautiful space,” says Lopez in a voiceover. “Or simply create it.”

The commercial, which highlights the BDS system, is targeted at any consumer who wants cutting-edge sound and design in their homes, not just technophiles who are willing to slog through hours of setup to get the perfect system, Dragon says. “Hi-fi in general has become difficult for consumers to operate,” he says. “What we’ve developed is something people can take home, set up in minutes and enjoy in a short period of time. It’s really all about trying to enhance the consumer audio experience and not frustrate the consumers."

The “Beautiful Sound” campaign is intended to showcase Harman Kardon’s design elements, as much as its famed sound, Dragon says. (The brand is the only audio brand represented in the New York Museum of Modern Art’s permanent collections.) “We are and have been launching a number of consumer electronics products that we are leveraging for industrial design more than ever before,” Dragon says. “We’ve been about amazing sounding products. Now, we’ve gone and taken an even higher road on the design elements.”