If love means never having to say you’re sorry, then goCharge branded kiosks, found in 50 New York City bars, means never being without the ability to send a drunken text message.

The manufacturer and distributor of kiosks capable of speedily charging mobile devices doesn’t work solely with bars and restaurants; the company has placed kiosks in malls, university student unions and hospital waiting rooms. “GoCharge is [also] becoming popular in the conference/expo circuit as the kiosk helps exhibitors and sponsors drive traffic to their booths,” said Paul King, founder of goCharge.

GoCharge launched in 2008, and its ad-wrapped kiosks range from 2 to 6 feet in height, depending on locations.

Patrón 's kiosks are roughly 2.5 feet tall and feature large digital touchscreens containing branded content that users can view while charging their mobile device. Charging takes about 10 minutes, and, not surprisingly, consumers tend to order more food and drink while they wait for their phone to charge. 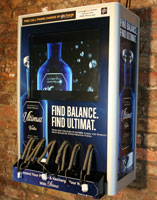 The kiosks can charge 16 mobile devices simultaneously and can be outfitted with a credit card reader or bill collector, or offered as a free service. The average length of a campaign ranges from 6 to 12 months.

There’s even a goCharge iPhone app to locate the New York City bars that house goCharge kiosks. The app lists all of the bars and locates the closest ones via GPS.

Additional brands that have advertised on goCharge kiosks include AT&T, Amex, Bacardi and Sprint.