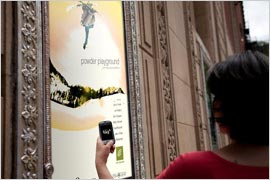 Microsoft has been fighting an uphill battle with the QR codes in recent years. While the company has been pressing its own Microsoft Tag as a superior, richer 2D code platform, the QR standard has become ubiquitous -- the default moniker applied to all 2D codes now.

Recognizing that there has been confusion in the market over conflicting code standards and the capabilities of reader apps for smartphones, Microsoft announced that its Tag app will recognize a broader range of activation mechanisms.

In a blog note, Aaron Getz, general manager, Microsoft Tag, explains that the app will be a “one-stop for marketers.” Until now, Microsoft’s Tag app was compatible only with its own Tags. “However, based on feedback we’ve heard in the industry, marketers wanted an easy way to use a full suite of recognition technologies all in one place,” he writes. “There is increasing frustration among consumers over not knowing which reader to use for which code.”

At the same time, Microsoft is focusing on the next generation of mobile activation technology and building in support for Near Field Communication. The reader app presumably will work with NFC chips that many makers plan to include in handsets in the coming years.

Currently, only a few smartphones in the U.S. market come with NFC built-in, including a Google branded phone on the Sprint network that can make mobile payments via NFC. While it is acknowledging fragmentation in the market and the formidable use of QR codes across many segments, Microsoft continues to press its case for the Tag.

The company argues that QR codes offer limited back-end metrics and functionality and leave little creative latitude on the consumer-facing side. There are different Tag formats that can integrate logos and photo imagery. While QR codes seem to be ubiquitous at this point, the Tag format appears to have had some success among magazines.

Meredith recently announced it was standardizing on the Microsoft 2D codes in its content. Over the summer, the Tag project with Allure set a record for Tag activations for single campaign, 576,000 scans in a month. Microsoft says the number of scans increased 390% in October 2011 compared to October 2010, and the number of users was up 388%.