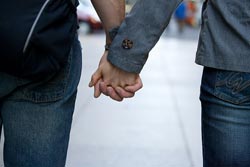 Social signals have an impact on search engine optimization. Jim Yu, BrightEdge CEO, identifies simple steps that brands can take to influence how search results serve up in queries. For starters, he suggests adding a link from the brand's home page to each social media site, such as Facebook, Twitter or Google+. "We took a look at the sites of the top 500 brands, and only about 50% have links to their social media properties," he said -- suggesting that the basic reputation management tactic remains underused.

It turns out that having an engaged audience in social media drives search query rankings. BrightEdge also ran a test to see how social signals impact search rankings in a study that looked at 10,000 keywords across ecommerce, financial services, and business to business, among others, and found that of those with page ranking in the top 10 positions, about 80% have Facebook Likes and Shares, and Twitter tweets.

It makes sense that Likes and tweets have the highest influence on search rankings, followed far behind by signals from LinkedIn and Google +1.

Google's Kelley didn't know how much weight +1 holds for search query rankings, but assumed it will be "more heavily weighted in the future."

Sending its own signal to marketers, publishers and advertisers on the influence of social data, last week Google invited social networks and platforms to integrate activity stream data with Google Analytics. It should give all, including Google, a view into how social data is scored across the Web, according to Kelley.

Social signals drive conversions and new customer acquisitions. Levi's, for example, puts a Facebook "Like" on each one of their products, so they can target specific product ads to each consumer who clicks the button. It makes response and publishing rates more relevant.

Among the examples, Merickel said "if we create a significant Fan or Follower base we could leverage publishing mechanisms to generate revenue that becomes a significant stream."

For instance, a campaign for Expedia gained 1 million Facebook Fans in six weeks, he said. They presented targeted offers to those Fans, tracking the revenue with Omniture on the back end and linking it to the Facebook channel. Sponsored Stories in Facebook also worked well, driving more than 60% of the Fan acquisitions.

When consumers become Fans they provide a set of data, Perlman explains. "We've been looking at the data source and use it not just to refine Facebook campaigns, but for terms to target in search engine marketing," he said. "Google provides less access to queries in natural search. Anyone who is logged into Google+ no longer passes that query on a natural click, so you have to find additional sources. That application data that comes from Facebook is a source."

Perlman said that a primary link exists between social engagement and SEM.