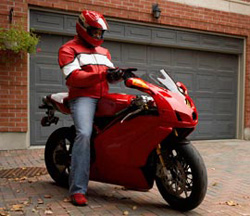 Motorcycle retailers are getting better at customer service -- which is good, because that's pretty much the nuts and bolts of what they do. J.D. Power & Associates reports in its 14th annual U.S. Motorcycle Competitive Information Study that overall motorcycle customer satisfaction has increased versus 2010, driven by better sales experience, the products, and cost of ownership.

The study, based on responses from 8,123 owners who purchased a new ride between September 2010 and May 2011, takes a "one down, five up" (motorcycle-ese for six gears) approach to the overall ownership experience: product; build quality; cost of ownership; sales; service; and warranty.

The study shows that the biggest improvement came from the sales satisfaction component, increasing to 856 from 838 in 2010, based on a 1,000-point scale. Satisfaction with the product and cost of ownership also saw improvements versus 2010.

"As satisfaction increases, so does owner loyalty and advocacy," said Brent Gruber, senior manager of the powersports and commercial vehicle practice at J.D. Power and Associates. Gruber said the market is showing recovery, as customers spent more for their motorcycle in 2011 than they did last year. The average owner-reported price paid in 2011 is $16,125 -- nearly $2,000 higher than in 2010. On average, owners this year are spending $1,340 more on aftermarket parts and accessories and $439 on riding gear, also an increase versus last year. "Manufacturers that focus on delivering high quality and superior service now will experience a long-term positive financial impact from their efforts."

The engine was the source of the greatest proportion -- or 27% -- of problems, although that's down somewhat from last year, per the firm. This is not surprising, given the proximity of engine to rider, excessive, unusual engine noises, and excessive engine vibration were 51% of all engine-related problems.

The firm says Issues with fit and finish comprise the second-largest proportion of problems, followed by problems with braking and the ride.