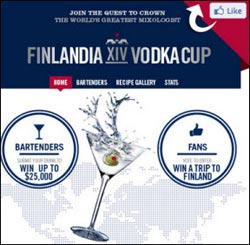 Finlandia vodka is using social/online media to turn a longtime, strictly trade event into an opportunity to engage consumers as well.

For more than a decade, the Brown-Forman brand has been building awareness and goodwill among bartenders worldwide through its Annual International Finlandia Vodka Cup.

The basic premise: Bartenders entered their favorite Finlandia cocktail recipes on a local basis, then went through regional and national rounds to vie for being among the finalists who win trips to Finland to compete for world Finlandia mixologist honors and cash prizes.

But for the current, 14th year of the competition, Finlandia is bringing consumer fans into the contest, as well as driving greater involvement by bartenders, by having bartenders submit their “long drink” recipes online, posting these in a gallery, and encouraging fans to vote on the recipes through Finlandia.com or the brand’s Facebook page.

While 19 of the finalists are still being chosen by an official judging panel, the 20th will be determined by the popular fan vote. Fans who voted were entered into a sweeps in which three of them will win trips to the Cup finals in Finland, to be part of the judging panel at the live event.

During the entry submission/voting period from Oct. 21 through Nov. 23, Finlandia promoted the contest through its site, Facebook page and Twitter presence, and participating bartenders were encouraged to use social media to drum up votes for their entries.

Results: During that first phase, visits to the brand’s site were up 120% versus the previous month, new Facebook likes were up 74%, and total online/social engagements with consumers (likes, sharing, comments, site visits, etc.) were up 40%, reports Lynette Green, interactive marketing manager for Brown-Forman vodka brands. Moreover, the contest drew drink recipe submissions from 363 bartenders from 34 countries.

The bartender finalists (who will compete to win cash prizes that total $25,000 over three categories, including the long-drink category), as well as the three consumer voters who have won the trips to be judges during the finals, will be announced on Dec. 27.

In addition, Finlandia hopes to draw considerable additional consumer and bartender engagement by live-streaming the “long drink” portion of the live competition on Feb. 1.