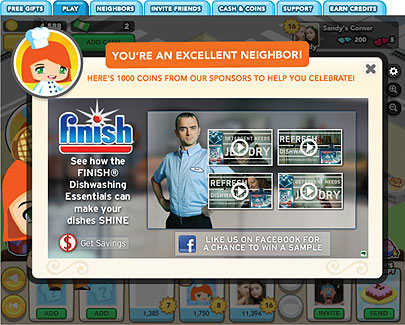 Social advertising company appssavvy has raised another $7.1 million in new funding from AOL Ventures and prior investors including True Ventures, The New York Times Company and Scott Kurnit, co-founder of About.com and founder and CEO of AdKeeper. The latest financing brings its total raised to date to $10.2 million.

With the fresh capital, appssavvy plans to continue building out its “adtivity” platform -- serving advertising tied to particular actions people take in social media or games, such as updating their status, reaching a new game level, earning virtual goods or participating in a poll. Since rolling out the ad system in September, it has been adopted by more than 125 publishers and advertisers including American Express, Chase, and Coca-Cola.

Per appssavy, the result is higher engagement.

The company says the adtivity unit, a 600 x 300 ad that pops up in the center of the page, is delivering interaction rates four to eight times the average for online display advertising. Last month, the company also rolled out a mobile SDK (software developer kit) for the adtivity platform, allowing publishers to bring the socially targeted ads to mobile apps.

In addition to enhancing its adtivity technology, appssavvy plans to use the latest funding to create more partnerships with publishers and advertisers, and to expand internationally. When it launched in 2008, appssavvy’s focus was mainly on repping app developers to brands and agencies.