Ancestry.com: 'Give The Gift Of Family' 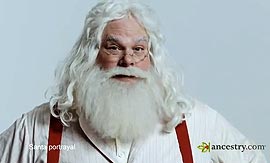 Christmas doesn’t have to be about material goods (and indeed, many people claim it’s not). Ancestry.com is out to make family be the central part of the holiday season with a new marketing campaign that encourages people to “give the gift of family.”

For the new, internally produced campaign, the genealogy Web site takes a tongue-in-cheek approach to selling its memberships with a campaign tracing some of Santa’s family tree. “We asked ourselves, ‘How do we stand out in a crowded holiday market, and how can we create something that’s truly ownable?’” Debra Chesterton, vice president of acquisition at Ancestry.com, tells Marketing Daily. “It gave us a good opportunity to be more irreverent and playful.”

The commercials depict Santa revealing aspects of his family tree that many people may not have known or perhaps suspected. In one spot, Santa reveals that his great-great-grandmother is the tooth fairy. “How do you like that? I give toys and she gives dollars for leftover body parts,” Santa says. “That’s not weird.” Other spots tell about a history in which a great-great-grandfather one year used polar bears rather than reindeer (he went back to the deer because the polar bears got hungry, and the revelation was found by checking death records of elves) and that for two years, a female ancestor in Bolivia delivered gifts dressed as a man.

“The fun thing we found when we started looking into Santa’s family tree is that there’s no history,” Chesterton says. Many of the ideas, she says, were developed on-set, which has resulted in outtakes and behind-the-scenes videos being posted on YouTube and the company’s Facebook page.

The campaign, which asks people to “Give the Gift of Family” by buying a membership to the site for someone, is running in some of the traditional spaces Ancestry.com has run before (such as the History Channel, Fox News and Lifetime Movie Network), but is also targeting a slightly younger demographic, who is more likely to give the gift to someone in Ancestry.com’s 45+ demographic sweet spot, Chesterton says.