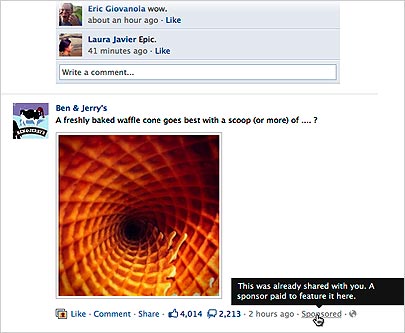 Facebook will begin inserting its Sponsored Story ads directly into users’ news feeds early next year to further boost interaction with the unit. Sponsored Stories allow advertisers to republish user posts related to brands or products in the form of small display ads that currently appear in the right column on Facebook.

Ads can be created, for instance, around someone “liking” a brand’s fan page, “checking in” to a venue, or using an app, among other types of status updates.

Starting in 2012, these ads will appear in the news feed, much like other posts, except for being labeled as “sponsored” in the bottom right corner, based on a mock-up of the placement Facebook released today. In effect, a Facebook user could see a friend’s update initially in their feed as an organic post and then later as an ad. At the outset, people will see no more than one Sponsored Story a day in their feed each day.

While details are still being worked out for the January launch, advertisers won’t be able to buy placement only in the news feed for Sponsored Stories, which will continue to run elsewhere on Facebook. The company didn’t provide any information on how the change might affect pricing for the ads.

The step would make Sponsored Stories more akin to Promoted Tweets on Twitter or Digg Ads, which run in the stream of updates or stories a user sees and have the same look and feel as other posts.

How Facebook users will react isn’t clear, but a company spokesperson says the company plans to roll out ads in the news feed gradually so as not to irk members. “The goal is to do this thoughtfully and slowly,” she said.

The Inside Facebook blog noted that Facebook recently added Sponsored Stories to the new Twitter-like Ticker feature on the home page without much of a backlash. It is also expected the ad format, launched at the start of 2011, would be included as part of the mobile ad platform Facebook plans to introduce in early 2012.

The addition of Sponsored Stories this year has helped Facebook reach what eMarketer estimates will be $3.8 billion in global ad revenue, up from $1.86 billion in 2010. But the format has also come under legal challenge from users who allege it violates a California law giving people the right to control how their names and images are used in endorsements. A federal court judge last week rejected a Facebook motion to have the case dismissed.

That legal setback obviously isn't stopping the company from expanding the presence of Sponsored Stories on the site.