Digitas' Bitterman On Owned, Earned And Hype -- And Why Google+ Has Been A Negative 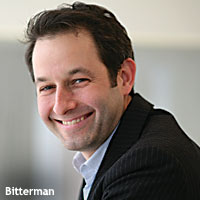 Facebook continued to dominate the social media landscape in 2012, but Google+ and Twitter introduced advertising and LinkedIn led the way to Wall Street with a successful IPO. To discuss these developments and look ahead to 2012, Online Media Daily asked Jordan Bitterman, senior vice president and social marketing practice lead at Digitas, for his views on the dynamic space.

OMD: Facebook’s latest overhaul, including features like Timeline and Ticker, as well as Open Graph apps, encourages brands to create their own apps for the platform. How do you think that will play out next year as these features fully roll out?

Bitterman: Publishers and app developers have real incentive to build into the Facebook graph. In doing so, they put themselves at the center of a highly sharable environment that provides both exposure for their brand and earned distribution for their content. While this immediate opportunity will create huge momentum for continued use of the platform, both consumers and brands are questioning whether the resulting abundance of push updates will create the dynamic of over-sharing -- and ultimately, burnout. On balance, we see strong growth, but will keep a firm hand on the tiller to make adjustments as necessary.

Bitterman: With 800 million users and legions of committed brands, Facebook has a huge head start. This will translate into another fruitful year for Facebook’s sales force. As the other platforms develop their brand page offerings, with new functionality and the possibility of streamlined graphics and coding standards, others will gain steam.

For example, Twitter recently rolled out its brand pages, which made the site more consumer and brand-friendly. While these brand pages likely won't pull followers away from engaging their favorite brands on Facebook, interaction with a brand for the users -- and ultimately, marketers -- will be greatly enhanced. Overall, social brand pages give marketers options to connect with an audience, and numerous factors such as content, participation and listening will be increasingly critical for marketing success.

OMD: What, if any, developments (or non-developments) in social media this year surprised you?

Bitterman: We were surprised by the lack of true adoption of Google+ after an initial burst. With all of the resources at their disposal, we don’t count them out by a long shot, but integrating G+ into other parts of the Google ecosystem -- as they intend to do --– would be wise. 2012 feels ripe for a breakout in this area. We are pleased with the speed in which brands are embracing marketing as service. (Digitas defines this as developing experiences with utility built-in.)

OMD: Will there be a standard metric for measuring effectiveness in social marketing campaigns? Is one needed?

Bitterman: Digitas has been working both on our own and with industry partners to solve the equation. Generally, however, trying to measure effectiveness in social is analogous to doing so in brand and direct marketing: Every client is different and every client situation is different.

The value of a fan or a follower depends on what you intend to do with them once you acquire them. The value of a connection on one platform is different than the value on another. Ultimately, we are making great progress toward standardization, but it will be a marathon in getting there -- not a sprint.  If anyone says differently, don’t believe them.

OMD: For Digitas clients, what proportion of their digital budgets goes to social media, and what portion to earned or owned media versus paid advertising?

Bitterman: Investment in owned and earned channels is adopting rapidly. Hype is driving part of this shift. Brands are also realizing that in the social age, working media simply doesn't work well on its own. Still, even at strong growth multiples, it’s challenging for clients to take the plunge. The paid media ecosystem –- and the associated metrics -– have been an established driver of objectives for decades. For the next ring of dollars to move to line items beyond paid media -- owned and earned live in this column -- innovator brands such as American Express and P&G will have to show the way.

OMD: Do you have any thoughts on what trend(s) in social media might emerge next year?

Social will prove to be the “killer app” that drives mobile growth and adoption. Two-thirds of Americans are on Facebook and three-quarters visit social networks regularly, yet smartphone penetration is at just 50%. Social will be a force to push that figure higher.

Investments in initiatives that stretch beyond paid media -- so-called 'non-working media,' such as development costs for brand pages or social applications -- and the buildout of the content that populates those experiences, will continue to scale as innovative case studies demonstrate an effective path forward.

brand marketing, metrics, social media
4 comments about "Digitas' Bitterman On Owned, Earned And Hype -- And Why Google+ Has Been A Negative".
Check to receive email when comments are posted.
Read more comments >
Next story loading