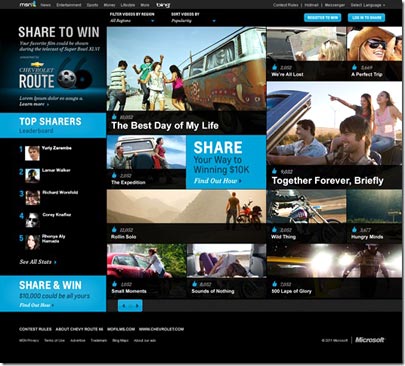 One could say that branded, Super Bowl-centered, crowd-sourced video contests are so 2010. Feeling otherwise, Chevrolet has tapped Microsoft Advertising and crowd-sourcing agency Mofilm to execute such a campaign.

With the help of Mofilm, Chevrolet began by asking independent filmmakers from around the globe to submit their interpretations of its “Everyday Hero” theme. The prize: a chance to have their 30-second ad aired during the telecast of Super Bowl XLVI in February.

To further engage fans, Chevrolet turned to Microsoft Advertising to create a contest hub to house and share the videos, which offers a personalized experience with the ability to localize and share the global films.

The carmaker then whittled 197 entries down to 35, and asked consumers to vote on and share their favorite submissions with friends -- all of which can be found on ChevroletRoute66.MSN.com.

Through Jan. 25, fans the world over can watch, rate and share their favorite Chevrolet Route 66 films.

Those who share their personalized link to the videos most often and give the most creative answer to the question “if you could drive to any destination in your home country, where would you go?” are also eligible to win up to $10,000.

“Because Chevrolet is sold in many countries, ‘crowd-sourcing’ [the] content globally is a great way to find creative advertising that resonates with consumers,” Joel Ewanick, GM vice president and global chief marketing officer, explained.

The Microsoft hub will identify registrants with unique user codes, which should allow them to accumulate points every time they share with another fan.

The top fans, as measured by sharing, will be tracked by the contest site leaderboard.

To be sure the contest is won by a real person and not a Web “bot,” the contest site will ask viewers to “confirm” by entering a valid email address.