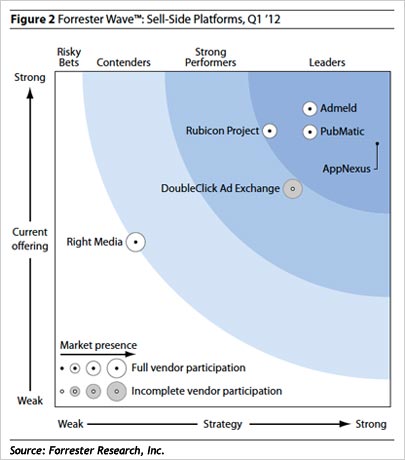 Google’s Admeld unit and AppNexus ranked as the “leaders” in the so-called “supply-side platforms” segment of the online display advertising marketplace, according to a new report from influential advertising services market researcher Forrester Research.

The report, which is the latest installment from the Forrester Wave series, described Admeld as a leader, given the “breadth of its current offering and its early innovation around features such as private exchange capabilities, variable price floor controls, and advertiser-level bid reporting.

“Although other vendors have recently added similar features and functionality,” the report continues, “Admeld’s legacy of innovation means that these mechanisms are often more refined today and that it can aggressively push forward into new development areas.”

Forrester named AppNexus a leader because of its “product’s deep flexibility and extensibility and its ambitious vision for how publishers will purchase and utilize ad technology.

“Although it doesn’t have the prettiest user interface, AppNexus provides a solid foundation for large publishers with lots of ad product strategists, technology developers and experienced operations pros.”

The report ranked PubMatic and Rubicon Project below Admeld and AppNexus, but said they rated “closely behind” the two market leaders, suggesting that the overall SSP market is close to a parity proposition.

In fact, the next closest competitor, Google’s DoubleClick ADX, didn’t rank far behind any of the market leaders, and Forrester gave it kudos for its “high reliability and integration into the popular DoubleClick publisher technology stack.” Given Google’s recent acquisition of Admeld, Forrester speculated that DoubleClick ADX is “bound only to improve.”

The only vendor to score questionable grades, according to Forrester, is Yahoo’s Right Media.

Even though it was the earliest online display ad exchange player, and pioneered many of the publisher-side controls, Forrester’s analysts said its parent Yahoo has a “mixed track record of investment in the product.”

That, plus “absent leadership, clients report concerns over declining customer service levels and the willingness of leadership to update the product at the same pace as other vendors,” led Forrester to conclude that Right Media “faces an uncertain future.”