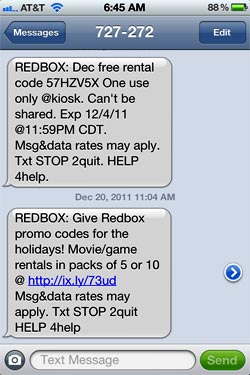 While apps and the mobile Web have made enormous strides in grabbing mobile user mindshare, the humble SMS message remains the preferred mode for receiving promotional offers from marketers. According to a new study of over 1000 users in each of four nations by the Direct Marketing Association and sponsor Velti, 33% of U.S. mobile customers said they preferred their offers by text message over the mobile Web (21%), apps (11%) and voice mail (8%). Of course, resistance to mobile promos overall remains high, with 50% of people in the U.S. saying they just don’t want to receive any on their phones.

There are regional variations in user preferences, however. While a third of U.S. mobile users prefer text, 58% of Germans and 60% of French users want SMS first. Interestingly, in both of those countries, overall resistance to mobile marketing is much lower than in the U.S. or the UK, with only 26% in Germany claiming they want no mobile marketing and 18% in France.

Carriers, once the all-powerful gateway to the customer, have fallen out of the loop. Among U.S. consumers especially, there is a strong preference (51%) for getting promotions on their phone directly from advertisers only, as opposed to receiving them only from their mobile operators (8%). The study finds that 27% of users are amenable to receiving offers from both. The authors contend that mobile operators have an opportunity to deepen their relationship with customers by activating the promotional channel, but in the U.S., 78% of consumers report that they have not been contacted by their networks with offers in the last month.

In addition to people simply being more sensitive about their personal devices being used for marketing purposes, some of the reticence over promotional messaging may be tied to the cost of SMS. There is still some concern in the market regarding who pays for mobile promotions. In the U.S., 27% feel they are paying for promotional messages and another 25% are unsure.

In the greater scheme of things, however, mobile is still behind the Web when it comes to consumer preference for receiving, managing and redeeming offers. For instance, in the U.S., 75% say they still prefer printing vouchers from their PC or shopping online (49%) to redeeming via mobile (17%). And when it comes to opting out of marketing programs, 80% prefer email, versus 18% via SMS.