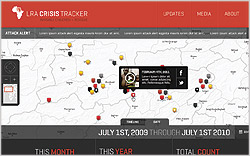 A West Coaster with heart, Digitaria links digital to results

There’s no arguing that Digitaria has delivered impressive results for clients such as Under Armour and Qualcomm.

But the interactive agency has also delivered knock-out results for charity using innovative technologies that have defined them as a digital leader. Their most recent innovation is the the lra Crisis Tracker, a real-time mapping technology developed for the nonprofit Invisible Children that debuted this fall. The tracker is an early warning system following Uganda’s rebel group, the Lord’s Resistance Army, as they move through Africa.

That’s all in a day’s work for Digitaria, but the effort epitomizes what they’ve done well — integrate technology into the real world in new ways. “This is technology to help solve a problem,” says Dan Khabie, the agency’s founder and CEO. “We can use skill sets of people here to create change. It’s part of our culture, to not just create digital products, but to change the world, which leads us to health projects and new mobile health technology that we are exploring next.”

Of course there are bills to be paid, but Digitaria doesn’t seem to have any problem paying them. As of early November, the company expected to finish 2011 with $20 million in revenue, 52 percent higher than 2010. Head count has risen from 115 to nearly 150, all the more impressive given the economic climate. The interactive agency was acquired in August 2010 by holding company wpp and is now aligned under wpp with advertising agency JWT.

While Digitaria can easily be categorized as a digital shop, the company’s ethos is broader. Digitaria aims for what it calls Digital Product Innovation, which refers to the actual design and creation of digital products for clients like Qualcomm, Mattel, Prima Home Theater and the usa Network. As an example, Digitaria created mobile apps for usa using an Adobe technology to build once, rather than many times, for multiple screens and devices.

Occasionally Digitaria’s modus operandi lies in finding new hooks into existing mediums, such as social media. At the end of the summer, Digitaria launched the digital portion of the “Do you hear footsteps?” campaign to help sports apparel company Under Armour gain more traction in the athletic market. Digitaria pivoted off of the brand’s tv campaign with star athletes like Tom Brady, but then added new elements such as letting users break into athletes’ Pandora playlists, as well as an online scavenger hunt. The campaign lifted brand awareness, drove Facebook fans past 1 million, generated 157 million impressions, and doubled the click-through rate.

Khabie wants to build off this work next year and expand deeper into retail. “We are working on new ways to drive retail through near-field communications, iPhone bumping where you bump a phone against an object, things to make the link between digital and retail,” he says.

Digitaria’s focus on user design, user experience and technology is what attracted jwt to the agency in the first place, explains David Eastman, CEO, North America, and worldwide digital director for JWT. “However, the thing that makes — or breaks — an agency is culture, and the culture at Digitaria is phenomenal. I love it when I walk into an agency and it feels like they are on a crusade. I imagine that when Dan interviews potential employees he says: ‘Do you want to sell Web sites for the rest of your life or do you want to come with us and change the world?’ ”